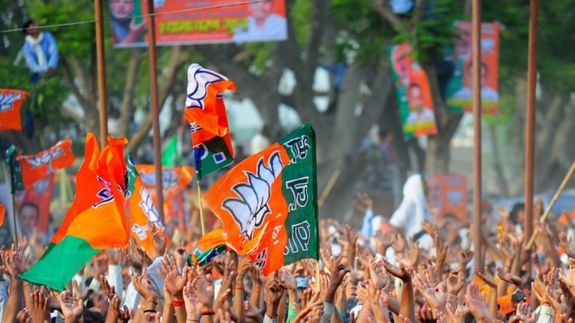 The party, which did very well in the state during the Modi wave in 2014, faces challenges not just in Vidarbha but also in Marathwada.

The electoral battle in Maharashtra is getting intense and interesting. In the second phase of the polls held on April 18, many prestigious Lok Sabha seats were at stake for all the parties in contest. Out of the 10 constituencies in the second phase, three were in Vidarbha, six in Marathwada and a seat of Solapur, bordering Karnataka.

In Vidarbha, indications are that the Congress-NCP alliance would continue to snatch seats from the BJP-Shiv Sena alliance. The latter had won all three seats in 2014. It can lose up to two seats in this round in Vidarbha to the grand alliance.

This means that out of a total of 10 seats in Vidarbha, the Congress-NCP might win four to five seats, which will be a huge gain. The Akola constituency, with the candidature of Prakash Ambedkar from Vanchit Bahujan Aghadi (VBA) and the lone Muslim candidate from Congress in the state, is the focus of much speculation. Advocate Ambedkar had won this seat twice on Congress support in the past and had lost it two times without Congress support. His election, from this unreserved constituency, produced an Akola pattern that was attempted at the state level, but failed. As per the Akola pattern, a candidate from a Scheduled Caste or OBC has a strong chance of being elected if the dominant caste votes are divided between two or more parties.

Prakash Ambedkar is relying on this formula in a new avatar, which is an alliance with the AIMIM. If Muslim voters turned their back on the Congress candidate, Hidayat Patel, to vote for Ambedkar, it would be a huge setback for the grand old party. The Congress, however, is confident that Muslims have voted for it in Akola even though it is unsure of a victory.

Amongst the six seats in the Marathwada region that went to polls in the second phase, two were won by the Congress in 2014. In fact, the Congress managed to win only two seats in the state in 2014, i.e., of Nanded and Hingoli. Former Chief Minister, Ashok Chavan, who was embroiled in the Adarsh controversy, surprised many by winning in Nanded when the Congress was wiped out from the state in the Modi wave. His victory also brought him the laurel of the party’s state presidentship. In the present election, the VBA has created troubles for Ashok Chavan, alongside the factionalism in the Congress. The VBA gets much stronger in the Marathwada region as compared to Vidarbha. The influence of the AIMIM over Muslims in Marathwada and the strong presence of non-Kunabi OBCs in all the constituencies are favourable factors for the VBA in the region.

The OBCs were divided between the BJP-Shiv Sena on the one hand and Congress on the other hand in the region. It was astute caste calculations of the late Pramod Mahajan and intense groundwork of the late Gopinath Munde that had carved out OBC vote banks for the BJP. Both the leaders belonged to the Marathwada region. The BJP had not only made a large section of OBCs vote for it but has also saffronised them.

Prakash Ambedkar’s VBA is trying to grab the non-saffronised OBCs, or the Mandalised OBCs, in the region that have been the electorate of the Congress-NCP alliance in the state. It is this threat that looms large over the prospects of Ashok Chavan in Nanded even though his supporters are upbeat about victory. Rahul Gandhi himself campaigned in Nanded, while Raj Thackeray also addressed the voters exhorting them to oust the Narendra Modi-Amit Shah combine from power.

If the Congress has to increase its tally in the state, it is important for it to retain the two seats that it won in 2014. The other seat, Hingoli, is doubtful as well due to the withdrawal of incumbent Lok Sabha member Rajiv Satav from the contest. Instead, the Congress has fielded an imported candidate whom Satav had defeated by a narrow margin.

Rajiv Satav is a young, dynamic, OBC leader whose absence from the state, at this crucial moment, has become a mystery in itself. A contender for the state president’s post, Satav is currently managing the Congress campaign in Gujarat.

Another high-profile seat for the Congress is Latur, which was a bastion of the late Vilasrao Deshmukh. It is now a reserved constituency. His sons are taking all the effort to win it back.

Latur shot to fame a couple of years ago when the state government had to supply water to it through a railway wagon. Water scarcity is the most pressing issue in the entire region and has the potential to change power dynamics in each constituency.

The BJP-Shiv Sena combine is facing a silent anti-incumbency on the water issue to the extent that its stronghold of Beed, a constituency nurtured by Gopinath Munde through social engineering, is shaken to the core. Unexpectedly, the NCP is looking at dislodging the Munde legacy in Beed in this election. If this happens, the main reason of the BJP’s potential defeat would be its inability to address the water problem.

The state government had advertised its attempt to make all villages water-sufficient. In fact, the Devendra Fadanvis government had given credit of the party’s victories in local self-government bodies to the successful implementation of water conservation programmes. All of it has fallen flat in the election year. The issue is not only one of disadvantage to the ruling BJP-Shiv Sena but also of upsetting the caste calculations of the VBA. As the socially deprived sections face the brunt of the water scarcity, they also have to rely on the people who can provide them access to water or ensure supply of water through tankers. In such a situation, the prudent behavior is not to antagonize the socially dominant people. This might have helped the Congress-NCP on the ground in Marathwada.

This implies that the best scenario for the BJP-Shiv Sena alliance is to be satisfied with four out of six seats, which means no gains for it, compared to 2014. The scenario is more optimistic for the Congress-NCP, which can win upto four seats out of six in this round.

The 10th seat in the second phase of voting is Solapur, which is reserved for the Scheduled Caste category. The most intense political fight is to be seen on this seat. Congress’ Sushil Kumar Shinde is pitted against VBA’s Prakash Ambedkar and BJP’s Siddheshwar Swami. Ambedkar’s candidature was considered stronger in this constituency than on his home turf, Akola, due to high concentration of SC, OBC and Muslim voters. The BJP’s candidate is a Swami of a Lingayat math that has huge following in the region. However, both these candidates have become polarizing figures that might result in unfavourable consolidation against them. The aggressive campaigning by Ambedkar’s followers has not only antagonized the Maratha community and a section of OBCs but also non-Buddhist Scheduled Caste groups. As a result, they seem to have backed Shinde while the remaining OBCs remain divided the VBA and the BJP.

Non-Lingayat voters fear domination of Lingayat sect due to the candidature of Jai Siddheshwar by the BJP, which has restricted the outreach of the BJP in the constituency. This has strengthened Shinde’s prospects even though Muslim voters remain elusive.

Asaduddin Owaisi of the AIMIM is a popular figure amongst Muslims in this region and he is leaving no stone unturned to mobilize their support for Prakash Ambedkar. The constituency has become a test case for the Congress to prove that the party is still the best option for minorities. The high-pitched battle in Solapur, however, did not result in higher voter turnout. Just 51.98 per cent voting has taken place in Solapur, which is well below expectation.

In 2014, the vote percentage was 55.86 that resulted in the BJP’s emphatic victory. The lower turnout this year has become a puzzle for all parties, which will be resolved only on May 23.

While political pundits, activists and leaders are anxiously waiting for D-Day, which is still a month away, people will be much more anxious about the arrival of the monsoons in this region. Perhaps, people are realizing that no government can bring them ‘acche din’ the way a good monsoon will do.