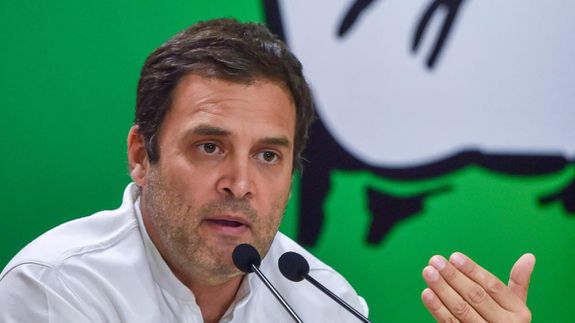 In the past couple of years, Congress people and party-less anti-Modi people expected Rahul Gandhi to turn the tables against BJP.

The 2019 Lok Sabha election results have created a peculiar situation for the Congress party. Rahul Gandhi has relinquished the president’s post, yet there is no one to shoulder the responsibility of the grand old party. While the scale of the defeat was unexpected for everyone within the Congress, the immediate developments after the results were on expected lines. Rahul Gandhi took responsibility and resigned from his post, which was unanimously rejected by the Congress Working Committee. Rahul Gandhi, however, twisted the familiar script by being stubborn about vacating the top party post. Meanwhile, true to their style and habit, RSS ideologues are poking fun at Rahul’s leadership ‘qualities’. Character assassination of an opponent and his/her devaluation through a non-political discourse are distinct ways of right-wing politics in India.  Nonetheless, the questions raised on Rahul’s abilities to win the pan-India election for his party are valid and his party must come to term with this.

In the past couple of years, Congress people and party-less anti-Modi people expected Rahul Gandhi to turn the tables against BJP. Obviously, the Congress people had no option but to bank on Rahul Gandhi’s charisma. There were two sublime features of Rahul’s approach to inner-party politics, which have not helped him win the Lok Sabha election. First, he has shown respect for the elders in the party and did not work against their interests. Second, he did not interfere in the functioning of Congress state units or Congress-led governments in the states. While both these points are praiseworthy, it did not help him create an image of a decisive leader. Unlike Modi-Shah’s micro-management of the BJP in every state, Rahul Gandhi could not demand accountability from state leaders – irrespective of their age and experience. In this respect, he was the complete opposite of his grandmother, late Indira Gandhi, whose style and persona voters compared to Narendra Modi’s.

Interestingly, Rahul had become a darling of not only left-liberal elites, but also for the sizable Dalit and tribal activists. It was rather a desperate attempt by all the party-less anti-Modi people to boost the image of Rahul Gandhi to counter the incumbent hegemon. The common understanding amongst party-less anti-BJP people had been that Congress was the only pan-India alternative to the BJP and Rahul Gandhi was much more credible than any other anti-Modi leader. He was certainly considered as more credible than Arvind Kejriwal, Mamata Banerjee or Mayawati. But the person whose credentials were boasted by the left-liberal-activists class was thoroughly rejected by the masses. The left-liberal-activists class committed two fundamental mistakes in its understanding of the situation. One, it overestimated the organisational strength of the Congress party. Two, it believed that Rahul Gandhi’s politics has been rejuvenating the Congress party. What happened was exactly the opposite! As Rahul’s politics could not ignite the Congress’ imagination, the party organisation further shrunk, except in Kerala and Punjab.

In this context, it is important to understand, in the first place, what Rahul tried to do since 2014. If we dissect Rahul’s focus and activities over the past few years, the following themes emerge: first, he wanted to change the Congress’ style of functioning by thoroughly bringing in professionalism. Second, he was passionate about reconnecting the party with Dalits, minorities and tribal people across the country. Third, he left it to the state units to decide about alliances with anti-BJP parties. If worked in tandem, this three-point formula had the potential to ensure an impressive electoral performance of the Congress in 2019. But the astounding electoral failure proved that nothing of the formula worked, forget about its working in tandem.

There could be two reasons for the failure. First, Rahul had not invested the effort required for the success of his formula. Second, the Congress leaders – from the CWC level to the district level – had not imbibed the spirit that Rahul was trying to inject into the party.

In reality, the failure is a combination of both reasons. If there is criticism that Rahul is not consistent in his efforts, he must take it in the right spirit. There is always scope for doing more in politics, more so for the moribund Congress party. On the other hand, the Congress leaders and activists haven’t followed their leader by example. Why is it that even after Rahul’s famous Niyamgiri climb, no Congress leader of the any worth not taken up the cause in Odisha? This attitude was best summed up by a Congress worker in Pune when he said, “When Rahul undertook a padayatra in Maharashtra in 2015, many state Congress leaders followed him; but in their SUVs.” Similarly, a student from Hyderabad had written on Facebook in response to the RSS onslaught on Rahul that “I remember Rahul Gandhi at the University of Hyderabad, how he interacted with the agitating students there after Rohith Vemula was killed. He was humble. He was submissive. Sitting at the shopcom in a day-long relay hunger strike for almost 18 hours he didn’t look tired. There was a sign of some helplessness on his face. The local leaders were kept away. I didn’t find him ‘pappu’. Though he is brief and not ‘charismatic’ in his speeches, he has a sharp content in them. I haven’t seen anyone in Congress other than him and Sonia Gandhi dare to attack RSS profoundly. We all can have differences with him and his party but we cannot ignore his solidarity with the students of FTII, HCU and JNU in recent times.” Rahul’s day out in Hyderabad Central University was enough for the Congress student and youth wing to hit the streets across India. Something that did not happen at all. Certainly, Rahul Gandhi was not on the wrong track but his party could not comprehend his objective.

In a nutshell, Rahul’s vision for the Congress did not match that of his party people’s. The latter wanted him to fetch votes of underprivileged sections, but did not strive to champion their cause. Hence, they celebrated his overnight stays in Dalit homes in Uttar Pradesh, but never did it on their own. Rahul’s singular failure was his inability to bring on board his party people during the struggles.  This has led to jokes such as he ending up as a Maoist, fighting a lonely battle only to face defeat. While few imagined him in the attire of a Maoist, there are many in Modi’s India who like to compare him to the last Mughal, Bahadur Shah Zafar. Like Bahadur Shah, Rahul Gandhi was a reluctant prince for many years. But not in the battle of 2019! He, rather, fought like Maharana Pratap and Jhansi ki Rani to defeat the new emperors of India. He also met their fate and so has India!