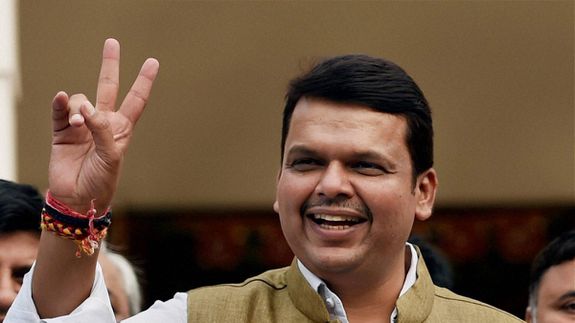 The last session of the Maharashtra assembly under the stewardship of Chief Minister Devendra Fadnavis is almost over now. Mr Fadanvis, a flamboyant RSS worker, is going to be the second person in Maharashtra’s political history to complete a 5 year term as Chief Minister. Prior to him, Shiv Sena’s Manohar Joshi had come close to achieving this feat, only to be deceived by Narayan Rane and ditched by his supremo Bal Thackeray. The only Chief Minister who completed a full term in office was the late Vasantrao Naik. He was the man appointed by the first Chief Minister of the state, Yashawantrao Chavan in late 1962.

Yashawantrao Chavan, a freedom fighter and stalwart politician, was invited to assume the position of Defence Minister by none other than Jawaharlal Nehru in the aftermath of India’s debacle in the 1962 war against China. Chavan’s nominee, Vasantrao Naik held the Chief Minister-ship continuously for 13 years. Later on, in 1991, Sharad Pawar attempted to don the hat of Yashawantrao Chavan by joining the Narsimha Rao ministry as Defence Minister. Just like the late Yashawantrao Chavan, Mr Pawar nominated Sudhakar Naik as Chief Minister of the state. Sudhakar Naik was a nephew of the former CM, Vasantrao Naik.

This déjà vu in Maharashtra’s politics, however, disappeared within 2 years as Sharad Pawar returned to state politics as Chief Minister.  In fact, Sharad Pawar has been dominating the political landscape of Maharashtra ever since his re-entry into Congress in 1988 even though he was Chief Minister from Congress only from 1988 to 1991 and 1993 to 1995. Prior to this, he was the Chief Minister of a loose coalition named Progressive Democratic Front from 1978 to 1980. Now, Devendra Fadnavis is almost there to replace Sharad Pawar as a hegemonic leader in state politics. The only hurdle in his path, now, is the forthcoming assembly election, which he is confident of surpassing with ease.

Mr Fadnavis has faced five crucial challenges as Chief Minister of the state. The first one was that of tackling senior leaders and cabinet colleagues of his own party. He was not the natural choice for Chief Minister-ship as far as the BJP was concerned even though he was the number one choice of the RSS. Opportunity came his way, and to the RSS, by the accidental death of Gopinath Munde. Mr Munde was from the league of Atal Bihari Vajpeyee, Lal Krishna Advani and Pramod Mahajan. He had carved out a certain autonomy for himself and for the party from the mother organization. As a result, he was already moved to the centre as Union Minister. Yet he was the most formidable candidate for Chief Ministership given his public acceptance. His death had opened up the leadership race within the state BJP, and RSS quickly moved in to place Mr Fadnavis at the top. It left other leaders heart-broken. Gopinath Munde’s daughter, although a novice in politics, considered herself as a legitimate heir to the throne her father would have occupied.

Similarly, Eknath Khadse considered himself as most eligible for the top post due to his seniority and resourcefulness. Very soon, both of them faced serious corruption charges through media allegations. While Eknath Khadase had to resign from the ministry, Ms Munde learnt to keep a low profile. Since then, there has been no overt or covert challenge to Devendra Fadnavis’ leadership within his party. Recently, corruption charges surfaced against a senior Maratha community leader and number two minister in the state government, Chandrakant Patil. He had played a crucial role in decimating NCP’s challenge in Western Maharashtra and could have been a viable option if BJP has to project a Maratha leader as next Chief Minister. No more now!

The second challenge to Fadnavis and his government was from its ally, Shiv Sena. For most of his tenure, the Chief Minister has taken the battle to Shiv Sena’s strongholds like in the elections of Mumbai, Thane and Navi Mumbai Municipal Corporations. He made it clear to Shiv Sena that BJP would not be playing a second fiddle to it anywhere in the state. BJP’s aggressiveness worked and Shiv Sena has almost meekly accepted the changed terms of its relationship with Fadnavis’ party.

The third challenge came from the Maratha Morchas for reservation to Maratha community in the state. There were claims and counter claims on who was behind the organization of mammoth rallies of Maratha men, women and children in each district of Maharashtra demanding reservation. Many believed that it was a master stroke of Sharad Pawar to galvanize support to his party in its community bastion. However, the election results of local body elections in the state immediately after the Maratha reservation agitation were contrary to expectations of many political pundits. The Bharatiya Janata Party performed extremely well everywhere in the state including in the areas dominated by Maratha leaders. This year, the Lok Sabha election results for the BJP were only improvement on the local body election results. Thus, Fadnavis proved himself as much smarter a politician than Pawar as far as Maratha agitation was concerned. The Chief Minister achieved it by two means. One, he and his party remained steadfast in their support to 16% Maratha reservation even though it compromises the interests of very core voters of BJP in the state, i.e. the Brahmins and Baniya urban voters. Fadnavis blamed the erstwhile Congress-NCP government for its weak formulation of the Maratha reservation act, which was struck down by the judiciary. This time, as his government passed a renewed Maratha reservation act, Mr Fadnavis ensured congratulatory posters and banners for himself on the streets of cities and towns in the state. Second, even during the agitation, Fadnavis had deployed RSS workers from Maratha community to take up the leadership on the ground level wherever possible. As a result, for most of the time, the agitations turned out to be get-together affairs of Maratha community devoid of politicization.

The fourth challenge to the Fadnavis led state government erupted in the aftermath of violence on 1st January 2018 on the Bhima-Koregaon issue. The RSS was determined to crackdown on the 1st January festivities of the Dalit community at Bhima-Koregaon as a mark of victory against Peshawai or Brahmin’s rule. It succeeded beyond its own expectation with the use of state machinery. Mr Fadanvis, who is also in-charge of Home ministry, did not let down his mother organization. The alleged perpetrators of violence against Dalit crowd visiting Bhima-Koregaon were not booked, while many have been jailed on the public charges of being urban naxals.

The anger amongst Dalit was systematically channelized towards Prakash Ambedkar led Bahujan Vanchit Aghadee, thus denying Congress-NCP any opportunity to make political capital out of the entire conflict. In 1997, the RSS and its political party had burnt its hands but learnt a lesson in the Dalit outrage after police shoot out in Mumbai that killed many Dalit youth. It was one of the major reasons behind the defeat of Shiv Sena-BJP government in the state in 1999. This time, the RSS was determined to not let Pawar exploit the Dalit-Maratha-Brahmin fault lines.

He utilized election campaign time to connect with grass-root workers along with breaking up the ranks of opposition parties. Mr Fadanvis, indeed, ensured that the Lok Sabha result in the state would automatically seal the result of forthcoming assembly election. With Shiv Sena firmly with BJP, Congress without a leader, NCP coping up with the losses and a buoyant Vanchit Bahujan Aghadee-MIM alliance, the Lok Sabha election results would not be any better for Devendra Fadanvis. In all likelihood, the 2019 assembly election in Maharashtra will be the end of the Pawar era and firming up of Modi-Fadnavis-Shah era in state politics.
Ironically, the issues and tactics that delegitimizes Sharad Pawar in state’s politics are being recklessly used by Devendra Fadnavis.

The latter is no different than Mr Pawar when it comes to cutting the wings of leaders from his own party on one pretext of the other, defections from opposition parties, popping up of proxy parties/candidates to cut into opposition votes and handling of the social agitations to reap political benefits. That was Sharad Pawar’s time, while Mr Fadnavis is coming of the age now. Devendra Fadnavis is the new Sharad Pawar of Maharashtra’s politics. For Maharashtra, it is a historic moment to proclaim that Pawar’s politics is dead, long live Pawar’s politics!