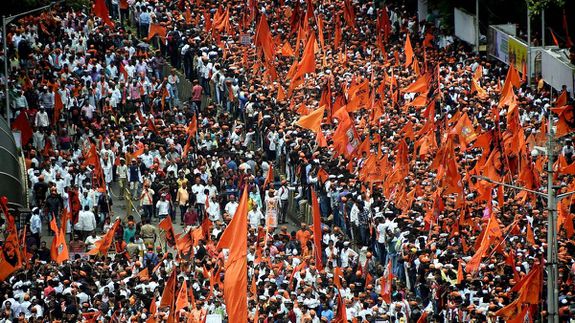 Whether they would remain in the OBCs list or would be included in the new 13% quota for Marathas is unclear. If it happens, the Kunabi and Marathas would both be the biggest losers providing gains for non-Kunabi OBCs and other upper castes in the state.

The Bombay High Court’s judgment on upholding reservations for the Maratha community is seen as the final nails, so to speak, on the coffins of the opposition parties in the state. It is viewed as an indictment of previous Congress-NCP government’s casual approach towards the issue, in sharp contrast with the ‘studious’ approach of the incumbent government. Just before the last assembly election, the then Chief Minister, Prithviraj Chavan and deputy Chief Minister, Ajit Pawar embraced the ordinance route to implement 16% reservation for the Maratha community in educational institutes and government jobs. Mr Chavan and Mr Pawar belong to the Maratha community.

The ordinance, however, did not stand the scrutiny of the High Court, which had squashed it much to the disappointment of the Maratha community. Now, the government, which is not only headed by a Brahmin but an ardent RSS Swayamsewak, has successfully convinced the Bombay High Court about the necessity of Maratha reservation. The high court judgment has been hailed by all the political parties in the state even though the Court has asked that the Maratha quota be reduced from 16% to 13% in the state. The total reservation in the state now stands at 65%, as 52% reservation was already in place.

There is much scope to believe that the entire series of events since the last 5 years on the issue of Maratha reservation was steered by the RSS-BJP, if not completely scripted by them. It was a classic case of the ruling party working on the Maratha reservation recipe to suit its own taste. Realizing the explosiveness as well as divisiveness of the issue, the RSS-BJP did not oppose the demand for Maratha reservation. However, it kept on making the point that despite 10 out of the total 18 Chief Ministers in the state belonging to the Maratha community, the latter remained in a state of backwardness. The criticism was aimed at  Maratha stalwarts like Yashwantrao Chavan, Sharad Pawar, the late Vilasrao Deshmukh and the father-son duo, the late Shankarrao Chavan and Ashok Chavan. The Maratha youth were convinced that leaders from their caste have ensured the prosperity of their families, but not of the community. This sentiment has helped the ruling alliance, while the delegitimized opposition leadership was unable to lead the agitation for reservation. The biggest lesson for Sharad Pawar’s Nationalist Congress Party out of this fiasco is a singular one, i.e. if you can’t lead the agitation under the party’s banner, don’t spend resources and time on it! The only explanation for why the NCP did not lead the Maratha agitation from the front could be its realization about the anger of the community against party leaders.

The RSS-BJP’s pro-active role in getting the consent of the judiciary for the Maratha quota also diluted the impression of the right-wing organizations being against the concept of reservation. In Maharashtra, the core of the RSS-BJP still consists of upper caste communities, particularly Brahmins, Jains, Marwadis etc. Their reaction to the Devendra Fadnavis government’s attempts to increase overall reservation in the state has been that of neglect and ignorance. The same communities have disliked the reservation system for SCs, STs & OBCs and have been quite vocal about it in private as well as in public. Their attitude is very different towards the Fadnavis government’s championing of the Maratha quota, at least till date. There could be two distinct reasons for this. One, the upper caste communities are no longer bothered about government jobs. The advent of the IT sector post-1991 along with several other opportunities in the service sector have benefitted the privileged and creamy layer of the Maharashtrian society. A random look at the pupils preparing for civil service examinations in the state shows that the overwhelming majority of them are from Maratha, OBCs and SC communities. These are the sections who have not benefitted much by the 7% and 8% growth rate of the Maharashtra’s economy. However, these communities now have first and second generation educated persons. A government job remains an ever-attractive proposition for them, which is not the case with the upper castes in Maharashtra. Yet, the students from upper castes still have to face the quota hurdle in medical and engineering institutes to pursue their dream in the private sector. Absence of any big noise in the upper caste in this regard is certainly intriguing, but not inexplicable. The impression in the core BJP support base is that of the political inevitability of the Maratha quota. If Mr Fadnavis did not implement it, the BJP would suffer a defeat in the assembly election. Hence, it is a question of increased quota for continuity of the Fadnavis government, or return of the Congress-NCP government plus Maratha reservation! The second reason would be that 35% seats are available everywhere for upper caste candidates whose proportion in the population is relatively much lower. Without the Marathas, the remaining upper caste population in the state is much below the 35% of the overall population. The Marathas are estimated to be a little over 30% of the state’s population.

Until now, the Marathas and all other upper castes have been competing for 48% of the open seats in the state. This means the Marathas had a higher probability of domination amongst the open category group. However, theMarathas have developed a perception that miniscule other upper castes have been eating up too much of a slice, while the latter have been apprehensive about former’s domination due to numerical strength. True, everyone can be technically fit to compete for the 35% open category seats; however, in all likelihood, the recruiters will ensure otherwise in all practical terms. Now, the upper castes could be happy that the Marathas have settled for a 13% share, while the latter is satisfied about secured seats for the community. So, is it a win-win proposition for all the communities in the state? May be not!

The Maratha representation has picked up in the government services in the recent time. As per the Justice (retired) G P Gaikwad Commission’s findings, the Marathas have acquired roughly 7 to 14 percent of Rank-1 positions from the state of Maharashtra in the UPSC examinations. The state government’s decision to enact the Maratha reservation is based on this 9-member Gaikwad Commission report. The Maratha representation in state services and state government’s jobs is even higher. The Bombay High Court judgment itself quoted the Gaikwad commission’s findings that “as on 31st August 2018, Maratha representation is 18.95% in Grade-A, 15.22% in Grade-B, 19.56% in Grade-C and 18.23% in Grade-D. The combined average proportion of Maratha employees in all the four grades is found to be about 19.05% against the filled posts.” If a community is already having about 19% representation in state government jobs, what justifies a quota of 13% for it? There is a further confusion about the status of the  Kunabi community. The impression is that the Gaikwad Commission has concluded that social-economic-educational conditions of Kunabi and Maratha are almost similar, hence both belong to same category. The Kunabi community is already included in the 19% OBCs quota in the state.

Whether they would remain in the OBCs list or would be included in the new 13% quota for Marathas is unclear. If it happens, the Kunabi and Marathas would both be the biggest losers providing gains for non-Kunabi OBCs and other upper castes in the state. While the upper castes are the core support base of the BJP in the state, the non-Kunabi OBCs have been voting overwhelmingly for it since the 1990s. This could explain the pro-activeness of RSS-BJP on  reservation for Marathas and the hastiness of the state government in decreasing the quota from 16% to 13% as per the Bombay High Court directives.The Bombay High Court judgment is going to be contested in the Supreme Court, but the political class in Maharashtra is not discussing the nitty-gritties of the Maratha quota. The ruling alliance does not want to discuss it and the opposition parties seem ineffective even at this time of political exigency.