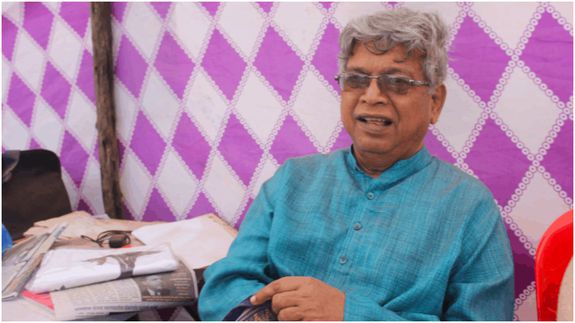 Raja Dhale’s departure has created a vacuum for many in a contemporary world that is devoid of radicalism.

The sad demise of Raja Dhale in the wee hours of Tuesday has shaken the conscience of Dalit and progressive movements in Maharashtra. Raja Dhale would have preferred the term ‘Ambedkarite movement’ instead of the ‘Dalit and progressive movement’ as this would be indicative of the inclusiveness of Dr. Babasaheb Ambedkar’s thoughts. Although his true relevance was unclear to his fellow travellers in the movement, Raja Dhale was not a forgotten hero in Maharashtra. However, his departure has created a vacuum for many in a contemporary world that is devoid of radicalism. His death brings about a harsh realisation that he never compromised his idealism while others deserted his league in their quest for power or daily relevance.

Unlike Namdeo Dhasal, Raja Dhale was not very well known outside Maharashtra. He was not a poet like Mr. Dhasal but he was not less poetic in his approach towards the hegemony of elitism in the literary world. This, according to him, was just a reflection of the dominance of Brahminical worldviews in society. Mr. Dhasal and Mr. Dhale were the lead figures in the Dalit Panthers movement in the early 1970s. Both of them, along with a few others, contributed immensely in bringing to the fore atrocities committed against scheduled caste people in Maharashtra. They were the first generation Ambedkarites after Babasaheb and had themselves undergone the identical situations that culminated into acts of atrocities against the erstwhile untouchables. Raja Dhale, in particular, realised that the first generation educated Dalit youth were still experiencing the pains of untouchability in the great literary world of Maharashtra. It was the period when educated Dalit youth were finding it difficult to accept the existing literature as a reflection of life’s reality or hope for the new world. In such an environment, Raja Dhale shot to fame as he confronted none other than Durga Bhagawat in a programme organised to release Namdev Dhasal’s poetry book. Smt Bhagawat, one of the most respected literary figures in Maharashtra, commented to an effect that rationalised the practice of prostitution. The young Raja Dhale angrily advised Smt Bhagawat to issue an appeal to women from middle and high classes to practice prostitution as a service to the society at large!

The dynamic Dhale founded Little Magazine to provide a platform to all those who could not gain a foothold in the mainstream literary world. The Little Magazine proved to be a great impetus to the non-periodicals and episodic publications in Maharashtra. The momentum generated by Little Magazine soon flourished into a phenomenon called Dalit Panthers.

Dalit Panthers was not only the platform of expressing angst against the ruling classes but was also the medium to express disappointment towards the then-existing alternative politics. After the sudden dissolution of Dalit Panthers, Raja Dhale steadily grew in stature, although not in popularity, due to his non-compromising attitude towards mainstream political parties. He unhesitatingly counted on the socialists and communists in the group of mainstream political parties, thus making it explicit that he rigidly preferred Ambedkarite politics only. He had a dream that the entirety of India would transform into the Ambedkarite vision of egalitarian society based on universal brotherhood and equality.

It was quite natural for Raja Dhale to dislike Shiv Sena’s opportunism and RSS-BJP’s parochial nationalism. He often openly questioned the credibility of Shiv Sena and its founder Balasaheb Thackeray on the issues of jobs and employment for Marathi people in Mumbai. He leveled an accusation against Shiv Sena that the percentage of Marathi people declined in Mumbai under their watch, while industries moved to Gujarat and Karnataka. He also ruthlessly demanded an explanation from Balasaheb Thackeray on his shift from love for language to a passion for religion. This was in contrast with the decision of Namdev Dhasal to join hands with Balasaheb Thackeray. Dhale had his differences with Dhasal on the fundamental issue of approach towards Marxism that the former had dismissed as incoherent with Ambedkarite vision. When Namdev Dhasal issued a Manifesto of Dalit Panthers, the amalgamation of Ambedkarite thoughts and Marxism was quite evident in it. Dhale termed it as Manifesto of Nama, i.e Namdev Dhasal, and floated his own organisation called Mass Movement. The differences between Dhasal and Dhale were one of the key reasons for the early dissolution of Dalit Panthers.

Raja Dhale remained unconvinced throughout his life on the viability of Ambedkarite’s alliance with Marxism. A progressive section, in turn, labelled Dhale as indulging in anarchism that occasionally provided fodder to right-wing politics. In fact, in the 1970s, one of Raja Dhale’s articles, The Black Independence Day, invited the wrath of the right-wing nationalists in the state. The article was published by a weekly Sadhana, which was established by a revered Gandhian, Sane Guruji. Later on, Sadhana became an unofficial mouthpiece of the socialists in the state. It was known for its Lohiaite leanings when Raja Dhale insisted on publishing his Black Independence Day without editorial censors. The article pointed out that a court in the state had fined an accused Rs. 50 for forcing a Dalit woman to walk naked in public. Around the same time, in another judgement, a court imposed a fine of Rs 350 for insulting the national flag. Raja Dhale provocatively asked about the utility of such a flag. Terming his choice of words as indecent, and hence an insult to the national flag, cases were filed against Mr. Dhale and the Sadhana publication. Raja Dhale refused to withdraw the article or change the wordings and dared the prosecutors to hang him for this offense. His defiance resulted in a tame withdrawal of the cases against him and Sadhana.

Of course, in those days the notion of the rule of law was much stronger than today. In today’s world of generating hysteria, labelling the opponents as anti-nationals and legitimising mob violence, it has become extremely difficult for young minds like that of Raja Dhale to express themselves freely. Those were the days when Namdev Dhasal was openly stating that man has created god and Raja Dhale was openly questioning whether women’s dignity and self-respect have less value than the flag of the Bharat Mata! In today’s times, the Dhasals and the Dhales might not have been as effective as they were in their times. However, they will be certainly missed, enormously!