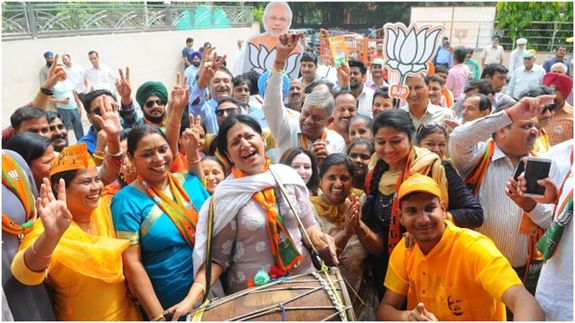 The biggest political story in Maharashtra, after the Lok Sabha election, is that there is no big story unless the Bharatiya Janata Party and the Shiv Sena decide to contest the elections separately.

Initial ground reports from poll-bound Maharashtra run along the expected lines. There is no emerging political plot in the state but mere confirmation of the established trends. The biggest political story in Maharashtra, after the Lok Sabha election, is that there is no big story unless the Bharatiya Janata Party and the Shiv Sena decide to contest the elections separately. If the biggest party in the world falls short of a majority, it is possible that there might be a BJP-NCP government in the state, but only if they cannot win 145 seats in the assembly election. During the Lok Sabha election, the BJP accommodated Shiv Sena’s demands to firm up the National Democratic Alliance across the country. It is unlikely to be equally flexible for the assembly elections. With the opposition decimated and the emergence of Devendra Fadnavis as a state-wide leader, the BJP has no reason to provide more space to Shiv Sena. In fact, the rise of Devendra Fadnavis is phenomenal in the state’s politics. All BJP leaders, workers, and the party’s traditional voters are enthusiastic about ensuring a second term for Fadnavis as the state’s Chief Minister. Voters who are not affiliated with any political party are much more inclined towards Fadnavis than any other leader in the state. Shiv Sena voters are determined to vote for their own party if the alliance breaks apart; however, they have no qualms with Fadnavis. The charm of the Chief Minister is such that many voters from the opposition ranks acknowledge his ability to win the forthcoming election, even though they won’t be voting for the BJP. His popularity in the state is equivalent to the support that Shivraj Singh Chauhan or Narendra Modi enjoyed in their respective states as Chief Minister ten years ago. If one insists on carving a story out of the Maharashtra elections, it is about Devendra Fadnavis. There is no other big story but the pre-election scenario is not story-less either.

An interesting footnote to Fadnavis’ rise is the fact that Amit Shah doesn’t seem to exist in the minds of voters. In the hierarchy of images, common voters have kept Narendra Modi at the top, Fadnavis in the middle, and their own sub-regional or local leader at the bottom. For example, Pankaja Munde has a popular appeal in the Marathawada region but she is no competition to Fadnavis. Her popularity remains at the sub-regional level. Rather, the symmetry amongst national, state level, and sub-regional leaders makes the BJP a lethal organization. In this scheme of things, Amit Shah does not fit anywhere in the minds of common people who are voting for the BJP. In fact, Amit Shah stands nowhere near the popularity of Nitin Gadkari in the state. While Gadkari receives appreciation across the state, he is as popular as Modi and Fadnavis in Vidarbha. Another interesting footnote, but a more important one, is the positioning of Prakash Ambedkar and Raj Thackeray as the most popular leaders from opposition ranks. Balasaheb, as Prakash Ambedkar’s followers refer to him, carries the support of almost all of the Buddhist population in the state, who emphatically state that Balasaheb must be the next Chief Minister. After the victory of the AIMIM in the Aurangabad Lok Sabha seat, Muslim voters have realised the power of an alliance with the Dalit party, resulting in many Muslim voters preferring Prakash Ambedkar as the next Chief Minister. But Muslims are not as unanimous as Buddhists are! One finds appreciation for Fadnavis amongst few Muslim voters while some have developed a liking for Raj Thackeray. In fact, a considerable number of young and urban voters are Raj Thackeray fans. Almost all of them, however, know that he lacks a party organisation and consistent activism.

Three other sub-stories are emerging out of the ground reports from Maharashtra that might amuse the opposition parties. The first is that there is a lack of concrete narrative of development with the ruling parties in the state. This is the biggest of the political paradoxes in the state. The BJP and the Shiv Sena approach the issue of development over the past five years from different points of view. The BJP pitches it as unparalleled momentum of development, while Shiv Sena plays the role of the opposition, questioning the actual implementation of various programmes and schemes. People, in general, think that the Fadnavis government is undertaking a lot of developmental work; however, the majority of them complain about bad roads, water scarcity, and the problem of dumping of waste materials. For many, the situation has not improved and for a few, the situation has worsened in the last five years. Yet, there is no imminent anger against the Fadnavis government on these issues. There cannot be a bigger hara-kiri of the opposition than their inactivity on exposing the state government’s claims. Five years ago, the BJP built up its campaign against the then incumbent government on these very issues and received thunderous applause from the people. In recent months, the opposition has failed to capitalize on the issues that matter to their fan base. It’s a classic disconnect between the people and the opposition leaders, resulting in the unabated popularity of Fadnavis and his government.

The second sub-story is about the recession – the financial slow down – that is affecting a vast majority of BJP supporters in the state. The trading community, the vyapari varg, openly acknowledges a slowdown in their businesses. However, there is no love lost between them and the BJP. Many blame the poor monsoon in the Marathawada and Vidarabha regions for the new wave of slowdown but also accept that the market is down since the time of Notebandi. Some are relieved about the fact that it’s a global recession and has nothing to do with the Modi government. There is no one to whisper in their ears that Dr. Manmohan Singh had dealt with a more severe global recession and kept the Indian economy growing. Politics is not about facts. It is an art of creating narratives and counter-narratives. Voters are not wise, but they are also not villains. They are like budding babies. They champion the narrative that is most effectively constructed for them. The narrative has already been constructed absolving Modi and Fadanvis for the current state of the Indian economy and it has been willingly accepted by the overwhelming majority of the Vyapari Varg in the state.  The opposition leaders, including Ambedkar and Thackeray, take too much pleasure at the social media memes about the recession to make an effort to reach out to the people.

The third and most powerful sub-story is about the EVMs. There is a sharp polarisation and there are doubts and suspicions that are ever-growing in the minds of the voters, even the BJP voters. The polarisation is between hardcore supporters and opponents of BJP. There is gross distrust of EVMs amongst the Dalit and Muslim voters, while BJP’s traditional voters summarily dismiss any allegations of the possibility of EVM tampering. In a state that has no history of booth capturing type of electoral abuses, substantial sections of voters overtly expressing distrust in the EVMs is a matter for serious consideration. What is surprising is that amongst those who have voted for the BJP, there are a considerable number of voters amongst the poor and not so poor sections that are not sure about clean EVMs. No other campaign against the Modi government has penetrated as deep as the EVM management by BJP. But opposition parties and their leaders are not coherent on the issue. There have been no efforts to build a strong network to generate a powerful movement against the EVMs. Those who sincerely believe in EVM conspiracy have no faith in planning the movement. They are too busy in one-upmanship to take up the matter, which is benefitting the BJP. On the contrary, Chief Minister Devendra Fadnavis is ridiculing the opposition in all of his public addresses for questioning the credibility of EVMs. He has his ear to the ground and knows when to speak and when not to speak. If the opposition has a minimum intellect, they still have time to devise an effective strategy. The real point is that the opposition lost their collective political wills on 23rd May 2019.  If there is no political will, there is no political space for you!