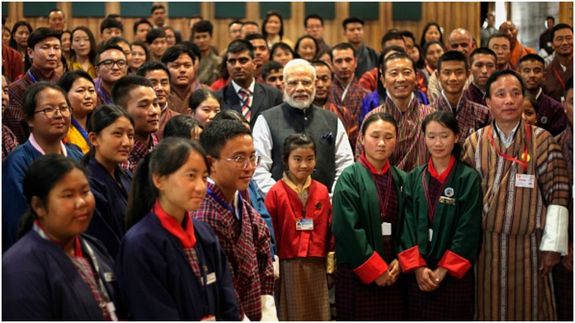 The Modi government’s foreign policy agenda is emerging clearer in the third month of the second term. The offensive against Pakistan, soft posturing in the neighborhood, a nuanced position concerning China, and a recalibration of relations with the United States seem to be the major action agenda of the renewed Modi government. This is a fine-tuning of different objectives and pursuits of foreign policy in comparison with Modi’s first term. The most important change seems to be the new External Affairs Minister, S Jaishankar’s complete involvement in the setting and execution of the foreign policy agenda. The new draft of foreign policy for the next five years has Mr. Jaishankar’s and Foreign Secretary, Vijay Gokhale’s clear imprint as compared to the exclusive dominance of the Prime Minister’s Office and National Security Advisor, Ajit Doval during PM Modi’s first term.

The first Modi government, just as the NDA government of A. B. Vajpayee and UPA governments of Dr. Manmohan Singh invested heavily in forging a closer relationship with the United States. However, 20 years of the relentless pursuit of creating an environment of natural friendship with the United States has yielded limited results for India. Rather, in the zero-sum game, the United States gained more as it courted India as a new friend in an environment of repositioning of world politics into multi-polarity. India’s foreign policy in the 21st century is revolving around shaping a multi-polar world; yet, India helped the United States arrest its slide from superpower status. India wants to achieve a great power status in world politics but is so wary of China that it wishes the United States to be a guarantor of security in case of Indo-Chinese armed conflict. While the latter scenario is quite feasible, as in the case of Japan or some of the NATO members, the same would be a major constraint on India achieving a great power status. India’s reluctance to play a major role in resolving different conflicts in world politics, either alone or with a group of emerging powers, has given free rein to the United States to dictate the course of action in world politics. The results of it cannot be more evident than what is happening and subsequently what is going to happen in Afghanistan.

India’s initial marginalisation in Afghanistan at the hands of other powers, including that of the United States, has now resulted in its complete exit from the emerging scenario of Taliban’s participation in the Afghan national government. One of the most disheartening setbacks for India is the existence of the China-Pakistan Economic Corridor (CPEC) which benefits areas claimed by India but occupied by Pakistan. While India expects unpleasant surprises from China, neglect from a natural ally is a matter of serious concern. Recently, there have been many other irritants in bilateral relations on different issues such as import of oil from Iran, trade tariffs, Trump’s intent to mediate on Kashmir, the bonhomie between Trump and Imran Khan, and a vague US proposal of a military tie-up with Sri Lanka. In this overall context, which is fueled by US President Trump’s foreign policy of deliberate uncertainties, India is attempting to recalibrate its relations with the United States. It would gain momentum only after the declaration of the US Presidential election result in November 2020, even though Mr. Jaishankar seems to have begun the groundwork. From the Indian perspective, the refashioning of bilateral ties would be mostly based on mutual reciprocity, increased Indian diplomatic engagement in world affairs, renewed efforts of India’s membership in world’s elite clubs, closing the knot around Pakistan on the issue of terrorism, and keeping the focus away from the China factor.

S Jaishankar is well known for his stint in Washington as the Indian ambassador and a reputation of being the longest-serving envoy in Beijing; he is well versed with the complexities and nitty-gritty of bilateral relationships amongst India, US, and China. Beijing keeps on reminding New Delhi about its ‘already achieved’ major power status by blocking India’s demands in international organizations, with the new normal being raking up the Kashmir issue in the United Nations Security Council for an informal discussion. India is slowly coming to terms with the major power status of China without acknowledging it, while the latter is sending signals of the importance it attaches to India’s position in world politics. The Wuhan spirit emanating from informal meetings and discussions between Prime Minister Narendra Modi and Chinese President Xi Jinping has become a driving force in the bilateral relationship. The Wuhan spirit informally sketched out parameters of bilateral engagement, which seems to have become the guiding principle in their approach to each other. The first principle is ensuring continuity in the growth of bilateral trade despite the imbalance favouring China. The second principle is a healthy competition of influence in India’s neighbourhood ranging from Nepal to the Maldives, with a rider that Bhutan would be an exclusive zone of Indian influence. The third principle is the non-antagonistic approach to Belt and Road Initiative, wherein India would not endorse the BRI without coming in the way of its progress. The fourth principle is the exploration of areas of cooperation for mutual benefits, which would require more institutionalised and non-institutionalised interactions at multiple levels between both the countries. The Wuhan spirit is bringing the Chinese President to India this year. It will be his second visit to India for bilateral purposes, while New Delhi still awaits confirmation from Donald Trump for his maiden visit as the President of the USA. This says a lot about the recalibration of Indo-US relations and the nuancing of India-China relations.

The bitter lessons for Modi’s foreign policy in the first term were mostly in the neighbourhood. The much-hyped announcement of Neighbourhood First policy had fallen apart only to provide some respite to India due to internal developments in Sri Lanka and the Maldives. While Prime Minister Modi still leads the bilateral drives in the neighbourhood, the brain behind the approach is thinking differently now. S Jaishankar had undertaken his first foreign visit as External Affairs Minister to Bhutan, while the Prime Minister has visited Maldives, Sri Lanka, and Bhutan so far in his second term. S Jaishankar has gone to the extent of announcing that India would not demand reciprocity in its relations with smaller neighbours. This return to the spirit of the Gujral doctrine is a result of diversification that India’s neighbours are bringing in their respective foreign policies. India’s big brother approach will not go down well with the neighbours who have options in China, the European Union, and the United States to stand up to pressure tactics by New Delhi.

The most consistent factor in the first and second Modi governments is its Pakistan policy. Since 2016, the Modi government has launched a diplomatic offensive to expose Pakistan to isolate and punish it for supporting anti-India terrorist groups. While punishing Pakistan remains a mirage, Modi government has tasted success in forcing Pakistan to impose some restrictions on individuals like Hafiz Saeed and Masood Azar, as well as curbing the activities of rabidly anti-India terrorist groups like Jaish-e-Mohammad. The Modi government is likely to continue to build international pressure on Pakistan to further take actions against such terrorists and their organisations. At the same time, Pakistan has overcome all the efforts to make it a pariah state in world politics and continues to enjoy best, comfortable, and workable relations with China, Saudi Arabia, and the US respectively. The US is assuaging Pakistan to keep the regional balance in its favour to withdraw from Afghanistan and for a possible intervention in Iran. This is where the US and Indian interests grossly differ, making it difficult for the Modi government to isolate and punish Pakistan. Realising this limitation, the Modi government has turned the focus on disciplining the Kashmir valley, thus keeping the conundrum volatile. In the process, however, it has invited geostrategic implication of getting hyphenated with Pakistan, which is antithetical to India’s quest for great power status. This is a puzzle in PM Modi’s foreign policy that no one is willing to solve.