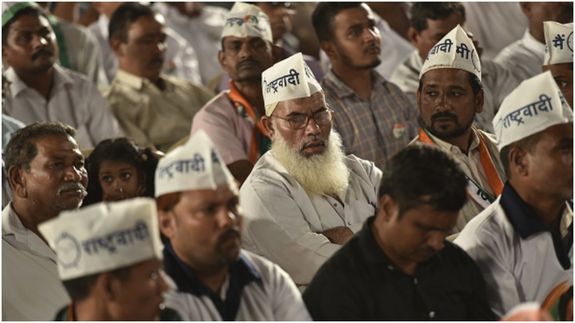 The most recent survey supervised by this author for Tractus predicted a surge in the prospective vote-share of the Congress-NCP alliance but a comfortable victory for the BJP-Shiv Sena alliance in the state.

The political status quo during the assembly election in Maharashtra is going almost unchallenged because no one is expecting much and no one is trying for a change. Almost, but not entirely! The election campaign is resulting in a subtle shifting of opinions across the state. The results will not defy expectations, but the opposition camp may get a sense of missed opportunities once the final data pours in on 24th October. The most recent survey supervised by this author for Tractus predicted a surge in the prospective vote-share of the Congress-NCP alliance but a comfortable victory for the BJP-Shiv Sena alliance in the state. The opinion poll was conducted between 9th to 15th October 2019, in 50 assembly constituencies, and with over 5000 respondents.

In the Tractus survey, 47% of the respondents indicated voting for the ruling combine, while 38% said that they chose the Congress-NCP alliance. While the saffron alliance is predicted to lose around 4% votes compared to the Lok Sabha election held in April-May 2019, the main opposition alliance looks like it will gain about 7% votes in the state. If this trend continues till the polling ends, the ruling alliance will not be able to register gains over its 2014 assembly election tally. However, the level of ambitions in the opposition camp is such that many have already declared a moral defeat for the BJP-Shiv Sena if their alliance doesn’t cross 200 seats. The majority mark in the house of 288 is 145. The smaller parties, again, are present only on the margins, including Raj Thackeray’s Maharashtra Navnirman Sena (MNS) and Prakash Ambedkar’s Vanchit Bahujan Aghadi (VBA). The Aam Adami Party and AIMIM are also in the poll fray but have limited seats. The AAP is contesting 26 seats while AIMIM is testing the ground on around 40 seats. Interestingly, AIMIM is experimenting on its own with forging the alliance of Muslim voters with other marginalised sections such as Dalit, tribal, and most backward castes amongst the OBCs.

Devendra Fadnavis, by and large, remains the most popular face for the post of Chief Minister. 39% of the respondents in the survey want him back as the Chief Minister of the state. Even though it’s not a very comfortable number, Fadnavis is way ahead of his nearest competitor. Congress’ Prithviraj Chavan, with 16%, is the distant runner up for the Chief Minister’s position. Interestingly, he is far ahead of other opposition leaders in the popularity ranking. Shiv Sena’sUddhav/Aditya Thackeray are favoured by only 11% of respondents.

What made Fadnavis so popular amongst the voters of Maharashtra is a combination of loan waiver for farmers, and steps taken for Maratha reservation.  Ironically, the opposition had ridiculed his loan waiver scheme in the past. The scheme, however, seems to have created goodwill for him amongst farming families.

The opposition is not without a point either on the issue of agriculture distress. As many as 27% of the respondents pointed it out as the most glaring failure of the Fadnavis government. On the other hand, a whopping 40% of the respondents have accused the Fadnavis government of not being able to create employment opportunities in the state. While the opposition parties tried to do something on issues faced by farmers, they haven’t bothered to do anything on the issue of unemployment in the state. Obviously, a majority of the unemployed and prospective unemployed youth would still get goosebumps listening to Narendra Modi’s speeches on V D Savarkar and article 370.

40% of the respondents found the state government guilty of not doing anything for employment generation and 27% of the respondents were completely unhappy with the state government for the faulty implementation of schemes for farmers; this could have been a fertile ground for the build-up of anti-incumbency sentiments. Additionally, only 15% of the respondents denied that they faced any negative financial fallout due to the prevailing market conditions. The remaining 85% of the total respondents agreed to a decline in their income due to economic slowdown. As many as 37% of the respondents expressed the feeling that they had been badly affected by the market slowdown, 27% revealed that they have suffered considerable losses, and 21% acknowledged some impact of slowdown on their income. These conditions should have enthused the political atmosphere with the spirit of revolutionary change, but this is not the case in Maharashtra, thanks to lethargic, self-centric, and more than satisfied leadership of the main opposition parties.

Naturally, the approval ratings of the state government are above normal and the Modi government at the centre continues to enjoy its honeymoon period even in its second term. Many compare the prevailing situation to the hegemony of Congress in the state until 1985, which is only partially true. In those days, the opposition parties always put up the best fight in their respective pockets, even though they knew about their eventual fate. They believed in taking forward their own politics through election campaigns. The new opposition in the state has no politics in its mind. They only wish to return to power whilst cashing in on anti-incumbency feelings that they consider as an inevitable part of the political cycle. The opposition, perhaps, believes in ‘change as the only permanent phenomenon in the world.’ However, it doesn’t believe in following its Vipaksha-dharma, i.e. the actions it needs to take as a party fighting against those not following the Raj-Dharma. But there is no dharm-sankat for the voters. People in Maharashtra are in the mood to punish the opposition once again for not following its Vipaksha-dharma. Judging the ruling parties on following their Raj-Dharma comes later on. Unless and until the opposition performs better in the role of the opposition, people would not provide it with an opportunity to govern. This is the mantra of politics in India that the opposition is unable to understand.

Read this article published in Asiaville on 18th Oct 2019