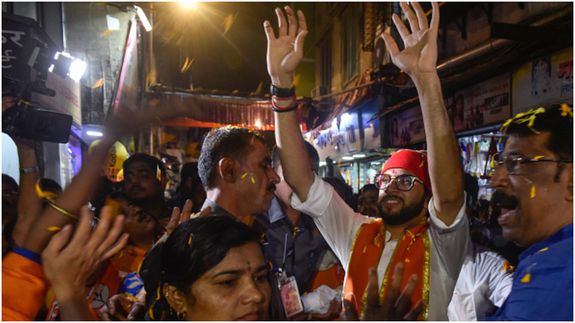 The Shiv Sena needs legislative leaders but can’t trust anyone anymore. Hence, Aditya Thackeray is contesting from the Worli constituency in Mumbai.

Aditya Thackeray’s decision to contest an assembly election is a significant departure from Shiv Sena’s rogue politics. Aditya’s grandfather and founder of Shiv Sena, Balasaheb Thackeray, always considered himself above the system. Balasaheb Thackeray’s words were law for the Shiv-Sainiks, who have been his loyal followers from the days of his anti-anna and anti-bhaiyya agitations. Hence, Balasaheb Thackeray always considered it below his dignity and stature to contest any election or hold any public post. When the first government of Shiv Sena-BJP was sworn-in in Maharashtra in 1995, Balasaheb Thackeray coined the term Remote Control for himself. In the days of advent of satellite channels and colour TV sets in Marathi households, the term became instantly popular. Balasaheb Thackeray’s positioning vis-à-vis his party’s government has been unique in India’s fragmented political system. Comparatively, it was a closure to Sonia Gandhi’s position in the UPA or that of Kanshiram’s in the BSP-led governments in Uttar Pradesh. Nonetheless, Sonia or Kanshiram were never averse to contesting elections. In fact, Sonia had been the leader of the opposition in the Lok Sabha against the towering personality of Atal Bihari Vajpeyee. Balasaheb Thackeray’s approach also had its origins in his dilemmas in terms of Shiv Sena being a political party or merely an organisation fighting for the cause of the Marathi people. Even though the Shiv Sena was founded in 1966, it became a regular contestant and indispensable part of the state’s politics since 1989. In sharp contrast with his father and grandfather, Aditya Thackeray has grown up in the maahol wherein only winning the elections matters for the Shiv Sena.

Aditya’s plunge into electoral politics is also meant to be a morale booster for the Shiv-Sainiks, who are perturbed by the treatment meted out by the BJP leadership. Once a dominant and dictating partner in the alliance under Balasaheb Thackeray’s leadership, Shiv Sena has been humiliated and cut down to size by the Modi-Shah duo. Shiv Sena is one of the three oldest allies of the BJP. The other two allies have been able to maintain their superior status in their respective states. Akali Dal, despite the recent electoral defeats, is still a senior partner in Punjab. The Janata Dal (United) has not only retained Chief Ministership in Bihar but also forced the BJP to forgo the Lok Sabha seats it won in 2014 to firm up the alliance. On the other hand, Shiv Sena not only lost the Chief Minister’s position to the BJP but the latter is also contesting a greater number of assembly seats than the former. Aditya’s electoral entry is an assurance to belligerent Shiv Sainiks to be patient, and it is a promise of a dominant future for the Shiv Sena. Aditya’s father and Balasaheb Thackeray’s son, Uddhav has been holding the fort over the last 5 years. But he is increasingly been seen as someone who wont be able to break the current status quo vis-à-vis BJP. Importantly, he has no appeal for the millennial voters. Once, youth were the backbone of Shiv Sena and Balasaheb Thackeray was a demigod for them. The new generation of young voters have now moved towards BJP with Narendra Modi’s iconic status. It is here that Aditya can make a key difference for the Shiv Sena.

Aditya’s probably certain entry into the state legislative body is also indicative of two important churnings within the Shiv Sena. One, its rough politics of intimidation, threats of violence and actual violence, and playing into the social dynamics of ‘we’ versus ‘they’ has reached a limit during the lifetime of Balasaheb Thackeray. Since then, the party has been struggling to grow, but it has not been able to come out of stagnation. Long term stagnation is a sure recipe for permanent decline in politics. If the Shiv Sena wants to avoid this fate, it has no other options but to officially embark upon legislative politics. It must have drawn a parlance with its alliance partner in terms of how legislative floors could be used to further political interests. The BJP has aggressively yet smartly used the legislative functioning to promote its political agenda, to project itself as an inclusive party and to shape up its leadership in the state. The late Gopinath Munde masterminded this game-plan for the BJP, and at the same time he was a product of this strategy. Later on, Devendra Fadanvis rose to fame by mastering the same strategy. Shiv Sena lacked any such leaders in the legislative houses after the defection of Chhagan Bhujabal. Shiv Sena might be eyeing such a role for Aditya. Two, Shiv Sena has a history of high-profile defections. Chhagan Bhujabal and its ex-Chief Minister Narayan Rane are two prominent examples of defectors. Both of them left the Shiv Sena when the all powerful Balasaheb Thackeray was alive and active. Now, the dangers of leaders who reached the position of prominence and popularity switching allegiance is much more for the Shiv Sena. It needs legislative leaders but can’t trust anyone anymore. Hence, Aditya Thackeray is contesting from the Worli constituency in Mumbai.

Shiv Sena, it seems, has entered into a long-term understanding with Prashant Kishor to make its fortunes in Maharashtra’s politics. Prashant Kishor’s strategising is based on face and personality traits. On the other hand, Shiv Sena is experiencing a political void for two reasons. One, it has almost given up championing the Marathi cause due to massive demographic changes that occurred under its very watch in Mumbai and suburbs. The very limited success that Raj Thackeray’s Maharashtra Navnirman Sena had in Mumbai also indicates that Marathi Manus is no longer a political currency in India’s financial capital. Two, the Shiv Sena embraced Hindutva in the 1980s that brought it into the electoral mainstream. However, its Hindutva is no match now for Modi-Shah-Bhagwat’s Hindutva coated with ultra-nationalism. The Shiv Sena cannot distinguish itself from the BJP on this count. Rather, for the youth and middle classes in Maharashtra, BJP’s ‘pan-India’ Hindutva is more attractive than the ‘parochial’ Hindutva of Shiv Sena and Modi-Shah’s anti-Pakistani nationalism is as good as Balasaheb Thackeray’s nationalism. Under such circumstances, Prashant Kishor may do wonders only if Aditya Thackeray turns out to be the wonder boy for Shiv Sena.

Read this article published in Asiaville on 11th Oct 2019