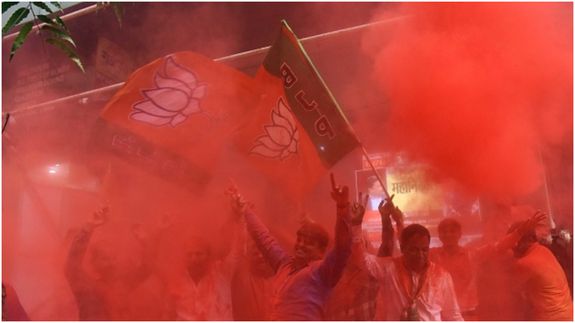 The NCP has made a strong comeback in Pune district while denting the BJP-Shiv Sena alliance in Nashik district. The message from these verdicts is loud and clear – Prime Minister Modi’s speeches are no longer a game-changer.

Prime Minister Narendra Modi conducted 9 election rallies in Maharashtra. All the locations were carefully chosen with a political message inherent in each of the rallies. On the inaugural day of his campaigning in Maharashtra, PM Modi went to Sakoli in Vidarbha. It’s a place without much political significance. However, the Prime Minister was keen on holding a rally there as Nana Patole was contesting from this seat. Nana Patole was the first Lok Sabha member from BJP before 2019, who had resigned criticizing the Modi government’s flawed approach towards farmers’ problems. Prime Minister Modi’s last rally in the state was in Beed, which is a district politically nurtured by the late Gopinath  Munde. His daughter, Pankaja Munde, has been a key contender for Chief Ministership and a counterweight to Devendra Fadanavis. Pankaja Munde lost but Nana Patole won in the election.

In between Sakoli and Parali in Beed, BJP’s prime campaigner went to Satara to ensure the re-election of Udayanraje Bhosale to the Lok Sabha in the by-election. Udayanraje is a descendant of King Shivaji and was one of the very few candidates in the last Lok Sabha election who withstood the Modi-tsunami. However, he decided to switch to BJP after his election from NCP platform and was confident of winning the by-election with Modi endorsing his BJP entry. But he lost to NCP’s Shrinivas Patil, who is a Pawar loyalist. Neither his being King Shivaji’s descendant nor Modi’s magic worked on the electors. PM Modi conducted rallies in Nashik and Pune as well, with mixed results. Both the districts were almost swept by the BJP/Shiv Sena in the 2014 assembly election. This time, NCP made a strong comeback in Pune district while denting the BJP-Shiv Sena alliance in Nashik district. The message from these verdicts is loud and clear – Prime Minister Modi’s speeches are no longer a game-changer. The intrinsic meaning of this is that PM Modi is losing his position as ‘anti-establishment’ and people have begun to look at him and his party as power-holders.

PM Modi has become so established and powerful that people have neglected the dynasty rule factor across the state. This has benefitted the Congress-NCP alliance as its leaders won hands down in their constituencies. All the candidates standing vis-à-vis Ajit Pawar in Baramati assembly segment lost their deposits, as the former deputy Chief Minister and nephew of Sharad Pawar won by 1 lakh 65 thousand votes. Another member from the Pawar clan defeated a minister in the Fadanvis government to enter the assembly. Rohit Pawar, a new MLA from a purely rural constituency is being seen as the future of the NCP in the state.  Congress’ youth leader, Viswhajit Kadam emerged victorious with 1 lakh 62 thousand votes in a constituency nurtured by his father, the late Patangrao Kadam. The latter was a minister in the state cabinet for many years.

Former Chief Minister Vilas Rao Deshmukh’s sons won from adjoining constituencies in Latur district to carry forward the political legacy of their father. The former home minister of India and former Chief Minister of Maharashtra Sushil Kumar Shinde’s daughter, Praniti Shinde was also able to defend her seat against many odds. Congress stalwarts such as Prithviraj Chavan and Ashok Chavan – both former Chief Ministers – and the president of the state unit, Balasaheb Thorat, registered thumping victories. All of them contested from their traditional family strongholds and emerged stronger. Political dynasties have reaffirmed their popular legitimacy in Maharashtra. They are indispensable for all political parties even though a few heirs apparent failed the electoral test. Like Pankaja Munde, Eknath Khadase’s daughter Rohini Khadase unexpectedly lost the plot. Eknath Khadase was number two in the state cabinet before he was purged by Devendra Fadanvis on corruption allegations.

Even though Chief Minister Devendra Fadanvis won the election from Nagpur, the BJP’s tally decreased dramatically in the Vidarbha region. An equally important development is that as many as five members of the Fadnavis ministry lost the election. Pankaja Munde is the most prominent of the ministers, but the defeat of Jaidatt Kshirsagar, a turncoat from NCP, is equally important. Another turncoat from Congress to BJP, Harshwardhan Patil, was defeated by NCP’s incumbent MLA. Harshwardhan Patil was amongst the contenders for the post of state unit president of the Congress after Ashok Chavan’s resignation. The biggest catch for the BJP in the season of defection was Radhakrishna Vikhe-Patil, who was the leader of the opposition in the assembly. He won comfortably although NCP-Congress made huge gains in the Ahmed Nagar district, signifying the end of Vikhe-Patil’s influence outside his own constituency. Most of the high-profile defections towards BJP-Shiv Sena happened in Ahmed Nagar, Kolhapur, and Sangali districts. The Congress-NCP alliance made significant gains in these districts. The defectors were baggage to carry for the Congress-NCP and proved no better for the BJP-Shiv Sena.

All of this indicates that there was a groundswell against the BJP-Shiv Sena government in the state, yet Congress-NCP failed to reach the majority mark. Rather, they had no plan to garner a majority in the state assembly. In particular, Congress as a senior partner in the coalition was completely rudderless as all of its leaders worked only on their own assembly seats. There were leaders but no one took the lead. The Congress in-charge for the state, Mallikarjun Kharge, did not turn up for campaign planning or actual campaigning. The newly appointed president of the state unit, Balasaheb Thorat, had no motivation to lead from the front and was busy in his home constituency. Except for Rahul Gandhi, no other central leader visited Maharashtra to campaign for any of the candidates. Even Rahul Gandhi’s campaign entry was as a guest performer. The neglect by the party and its high-command, however, proved to be a blessing in disguise for many Congress candidates. They worked on forging their own connections with the people in their constituencies and it worked like magic for them. The most enterprising experiment undertaken at the state level was that of Super Sixty! The Youth Congress adopted 60 assembly constituencies across the state and worked for the revival of Congress organization at the grassroots level. Youth Congress nominees bagged tickets on 48 of these 60 constituencies and emerged victorious in as many as 28 seats. Rural distress, traditional family strongholds, constituencies nurtured by youth wing and ally Sharad Pawar’s whirlwind campaign helped the party cross its 2014 tally.

What worked for the NCP was the projection of Sharad Pawar as its sole leader, with Sharad Pawar single-handedly leading the campaign charge. He was not projected as the Chief Ministerial candidate but neither was anyone else from his party. It is the first time since the formation of the NCP that Sharad Pawar has kept himself at the centre of the campaign in the state election. He has always been taunted as a failed regional leader when compared to the likes of Naveen Patnaik and Mamata Banerjee, who have captured the state power single-handedly. However, since NCP’s establishment, Pawar never intended to return to state politics as the Chief Ministerial contender. This separates him from all other regional satraps. However, Sharad Pawar now has a big role to play in the state. He has successfully steered the Congress-NCP coalition in the election. Now, he will make life difficult for the BJP-led government. The BJP’s increased reliance on the Shiv Sena, which itself has come down from 63 to 56 seats, and the emergence of the NCP as a bigger partner in a coalition with the Congress, which has received a confidence booster from the voters, is a new scenario in the state. This scenario is pregnant with many possibilities and Sharad Pawar is a seasoned surgeon to deal with it.

Read this article published in Asiaville on 25th Oct 2019