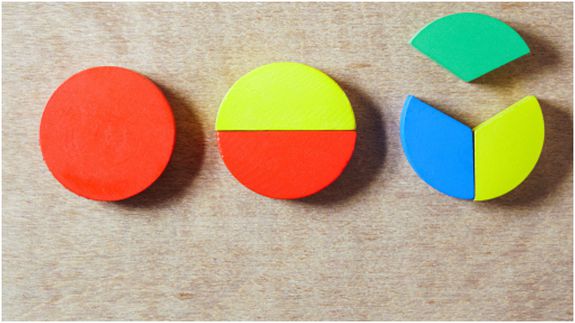 The space occupied by smaller parties is shrinking and the larger parties have become hegemons. These are not good signs for parliamentary democracy and really bad signs for a diverse and hierarchical society.

The recent assembly election and its results in Maharashtra indicate the consolidation of the multi-party bipolar political system in the state. It’s not good news for the smaller parties and is definitely bad news for the proponents of alternative politics. As many as 12 parties, other than the 4 major parties have their representatives in the state assembly now. Yet, the future looks bleak for these parties. 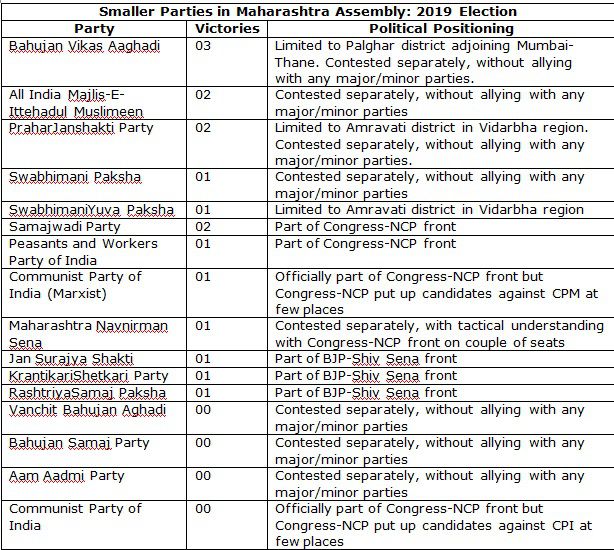 Three allies of the BJP-Shiv Sena front won 1 seat each. These parties are firmly rooted in the saffron alliance without any ambition of political growth. A stronger ally in the saffron front is Ramdas Athawale’s Republican Party of India (A), which is content with a ministerial berth to its leader in the Union ministry. All of them are primarily BJP’s allies and assets which helps them to bargain against the Shiv Sena in the grand political formation. The Shiv Sena, on the other hand, has shown no interest in winning over the smaller parties in the state.

The Congress-NCP was able to stitch together an alliance consisting of six parties for the assembly election. However, these parties are not firm political allies of the Congress-NCP, either at the national level or at the state level. In fact, both the bigger parties in the opposition alliance put up their candidates against the CPM and CPI candidates, going against the basic norms of alliance building. It also demonstrated the haplessness of the left parties, whose base is ever-shrinking in the state. A much-saddened case is that of the Peasants and Workers Party of India (PWPI), which once had a promising future in Maharashtra. The state-based left party rallied and commanded masses around its political agenda in the Konkan and South Maharashtra region. However, the expansion of the BJP and the growth of the Shiv Sena since 1986-87 in the state happened at the cost of PWPI’s space in these regions. Today, the PWPI is dependent upon the Congress and the NCP to secure its existence. The Samajwadi Party in the opposition coalition functioned more as a representative of the Muslims in Mumbai than any of the socialist values.

The AIMIM continues to threaten to snatch away Muslim votes from the Congress-NCP front. However, its limitations have also become clear in the past few elections. The AIMIM is a force only in areas where the Muslim voters are nearing or are above the 50% of total voters in the assembly constituency.  It is also facing a covert problem of leadership. It is similar to almost all the parties that are not national but aspires to be the national party in the real sense. The AIMIM leader Asaduddin Owaisi now has a leadership competition, at least in Maharashtra, from its Lok Sabha member Imtiaz Jaleel. The latter, in turn, has not ensured the victory of a single AIMIM candidate from any of the assembly segments under his Aurangabad Lok Sabha constituency. Jaleel, of course, would not like to have a competing leadership within his own party from his own constituency. The AIMIM’s failure to win an assembly seat from Aurangabad was also a result of the Hindutva polarisation against the Muslim party. The AIMIM threat worked in the BJP-Shiv Sena’s favour in the entire Marathawada region. Despite the shocking defeat of Pankaja Munde, the saffron alliance was able to win as many seats from the region as in the 2014 elections.

The Bahujan Samaj Party’s growth in Maharashtra was halted in 2014 and absolutely declined in 2019. The BSP too suffered from the covert leadership crisis in the state as Mayawati did not like a strong BSP leadership emerging from Maharashtra. Thus, the BSP supremo wanted the Dalit masses to support her and her party without any potential challenge to her supremacy from any BSP leader in Maharashtra. Her inability to win elections for BSP in Uttar Pradesh also contributed to the disillusionment of the Dalit masses. The Dalit voters are now either looking forward to Prakash Ambedkar’s Vanchit Bahujan Aghadi (VBA) or have returned to the Congress fold. Victories registered by Congress candidates such as Varsha Gaikwad in Dharavi and Nitin Raut in Nagpur as well as the Congress-NCP surge in the Vidarbha region signal this subtle shift amongst Dalit voters.

The collective inability of the BSP, the VBA and all the factions of the Republican Party of India to win a single seat in the state assembly should be a matter of grave concern for the Dalit and Bahujan movement in Maharashtra in particular and India in general. It attempts to conclude that right-wing socio-political consolidation is antithetical to the growth of Dalit and Bahujan parties in India. This point is important in the context of Prakash Ambedkar’s VBA emerging as the largest vote-catcher amongst the Dalit and Bahujan parties even though it hasn’t won any seat in the assembly. Prakash Ambedkar is repeatedly emphasizing on the equidistance from and equal fight against Congress-NCP and BJP-Shiv Sena in the state. He has termed the Congress-NCP as feudal casteist forces and the BJP-Shiv Sena as religious obscurantist forces. According to his formulation, feudal-casteist-corrupt Congress-NCP is the main reason for the majority of the people backing the BJP-Shiv Sena in the state. Whatever may be the case, the VBA has been unable to mobilize social capital to establish itself as a serious challenger to two dominant fronts in the state.

Prakash Ambedkar’s VBA and Raj Thackeray’s Maharashtra Navnirman Sena (MNS) have leaders with mass appeal and an agenda that could create its own political constituencies. Yet, both of them have not tasted political success in the state. The MNS is attempting to project itself as a regional alternative to Shiv Sena without communal colours. However, MNS has failed to realise that the Shiv Sena became a political option for voters when it dropped the Marathi card and embraced Hindutva. Hence, all of Raj Thackeray’s efforts to project his party as the saviour of the Marathi people are turning futile as the Shiv Sena is holding on to its Hindutva constituency.

Smaller parties require leadership and agenda to sustain and grow in politics. While some smaller parties do have an agenda, they lack the leaders to fight for said agenda. A few other parties have popular leaders but lack clarity in the political agenda. As a result, the space occupied by smaller parties is shrinking and the larger parties have become hegemons. These are not good signs for parliamentary democracy and really bad signs for a diverse and hierarchical society.

Read this article published in Asiaville on 1st Nov 2019