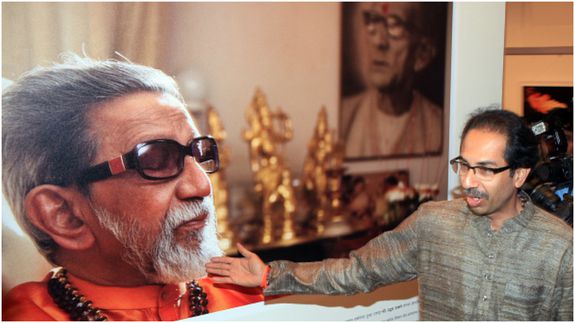 Prabodhankar Thackeray’s lofty legacy is knocking at the doors of Uddhav Thackeray and the Shiv Sena today. Will it prevail?

“There is always a sacred veil to be drawn over the beginnings of all governments.” This statement by Edmund Burke is used by the publisher in the preface of Uddhav Thackeray’s grandfather Keshav Sitaram Thackeray’s 40-page long booklet on King Shivaji in the year 1926. Who could have ever imagined that the government of Keshav Thackeray’s grand-son would have begun with a sacred veil over its birth itself! We will know sometime shortly, or perhaps never, about the exact transactions between the Shiv Sena-BJP, BJP-AjitPawar and Shiv Sena-NCP-Congress on the government formation in Maharashtra. At this point, however, a more pertinent question is what the ideological direction of Shiv Sena in Maharashtra will be. An answer to this question is important for the Congress, NCP and every single organization & individual supporting the alliance of three parties to keep the BJP away from power. But searching for that answer is much more important for the Shiv Sena. The easy options for Shiv Sena are either to return to the full regional and linguistic identity or be a mixture of Hindutva and regional identity. From 1966 to 1986, in the first avatar, electorally Shiv Sena was a non-starter. From 1986 onwards, it expanded rapidly on embracing Hindutva while selectively using the regional card. This strategy stagnated since 1999 resulting in the decline in Shiv Sena’s clout. Therefore, the Shiv Sena has to look beyond their tried and tested strategies without changing their style. What is at the core of Shiv Sena’s style is its flamboyant communication with the people. To arrive at what is to be communicated, Shiv Sena should look at the life and work of Uddhav Thackeray’s grandfather.

Keshav Sitaram Thackeray, known as Prabodhankar, lived from 1885 to 1973. He not only witnessed the foundation of the Shiv Sena but also addressed the inaugural rally, even though his social critic had hardly been appreciated by his son or his organisation. He earned the title of Prabodhankar – meaning social enlightener – due to his magazine named Prabodhan. He ardently advocated for social reforms amongst Hindus through the magazine. He lived in another time. Those days the orthodoxy opposed him for challenging age-old beliefs and practice systems in the Hindu religion. They never questioned why he was not championing reforms in other religions. It was precisely because Prabodhankar Thackeray successfully retained his Hindu identity while speaking against irrationality and unjust practices. Can the Shiv Sena replicate it today? Can it be a proud Hindu organisation and start speaking loudly against social evil and inequality amongst Hindus?

Prabhodhankar was a man of his own conviction, refusing to be bracketed with any particular ideology, cause, or ‘isms’. While he would champion the cause of the working class, he believed in Hindu philosophy with an equal amount of conviction. At a time when the Congress and the Hindu Mahasabha were both considered to be parties with Hindu leanings, Prabhodhankar decided to chart his own path.   He associated himself with the ‘Hindu Missionary Society’ which firmly believed that the leadership of the Hindu community should be placed in the hands of non-Brahmin classes. Perhaps, this philosophical lineage is reflected in Shiv Sena’s growth amongst the youth from OBCs as well as Dalits to some extent. His biographer Sachin Parab is of the opinion that Hindutva for him stood for progressive values and inclusiveness rather than a narrow-minded approach. Prabhodhankar never uttered a word against Muslims, Christians, or any other religious minorities. He relentlessly worked for internal reforms within the Hindu society by strongly opposing the orthodox Brahminism and their discriminatory ways. He protested Brahmins hegemony and their members acting as the sole spokespersons of the Hindus. He even tore apart M S Golawalkar’s demands for a ban on cow-slaughter. He joined Mahatma Phule’s ‘satyashodhaksamaj’ (society for the search of truth) to attain his goals. Phule is considered among the greatest social reformers, thinkers, and revolutionaries in India.

In 1921, Prabodhankar started ‘swadhya ashram’, a social organization to create consciousness of social issues among the masses. The organisation made a special effort to work for the empowerment of women and upliftment of the underprivileged. It would regularly organise widow remarriages. In 1926, during the ‘Ganpati Festival’ at Dadar in Mumbai, he appealed to the Brahmins to let a member of a lower caste Hindu perform prayers at the installation ceremony of Lord Ganesha. When the Brahmins chose to ignore the suggestion, Prabhodhan threatened to destroy the idol of the elephant god if his demand was not met. The Brahmin community fell in line. The prayers finally took place at the hands of ‘Madkebua’, a Dalit community leader. In another incident, he set a marriage pandal on fire. Prabhodhankar was agitated at the forceful wedding of a 12-year-old girl with a 65-year-old man. His activism was essentially to enforce principles of equality and social justice.

It was ironic that the Shiv Sena not only jumped into the Ayodhya movement in the late 1980s but also openly took credit for the destruction of the Babari Mosque at the disputed site. Prabodhankar Thackeray had written a piece in Marathi depicting temples in the Hindu religion as a conspiracy of Brahminism. He wrote that temples were non-existent in ancient India. ‘Does it mean Hindus were not worshipping the gods?’, he questioned in his own style. In this epic essay titled Devalancha Dharm ani Dharmachee Devale (Religion of Temples and Temple of Religion), he referred to Aryans conquering Punjab and alleged that Shankaracharya destroyed Buddhism to install Brahminism throughout India. It was obvious that Prabodhankar and RSS could never work together, even though the former had good communication with several influential leaders from Bal Gangadhar Tilak to V D Savarkar. It was again a paradox that the founder of the Shiv Sena, Balasaheb Thackeray, ridiculed Gandhi on several occasions while publicly eulogising the Godse clan in the frenzied days of the 1990s. Prabodhankar, it is said, had his disagreements with Gandhi on several counts. Yet, he refused to write for Nathuram Godse’s Marathi magazine Agrani as Godse would insist on referring to Gandhi as Mister Gandhi and not as Mahatma Gandhi.

Prabodhankar’s place on the ideological line is somewhere between a radical social reformer and a rationalist. Mahatma Jyotiba Phule and Shahu Maharaj influenced his writings immensely. He had taken forward Mahatma Phule’s theoretical understanding of a dialectic between Brahminism and Bahujans (all except Brahmins). In fact, he was given a task by Shahu Maharaj to critically assail Brahminism in Maharashtra who were continuously speaking against the social reform movement of the time. Chatrapati Shahuji Maharaj of Kolhapur was a descendant of King Shivaji. He is credited with implementing first reservation policy in jobs and education for downtrodden classes in his kingdom. As the conflict between Brahminism and Bahujans (non-Brahmins) began to intensify, the two sides used newspapers to propagate their viewpoint and counter each other. According to his biographer Sachin Parab, it was during this time that Shahuji trusted Prabhodhankar to write for the movement. It is this legacy that is knocking at the doors of Uddhav Thackeray and Shiv Sena today. Sooner rather than later, they have to take a call on whether to shoulder it to its glory or bury it deep beneath the Arabian Sea.

Read this article published in Asiaville on 2nd Dec 2019