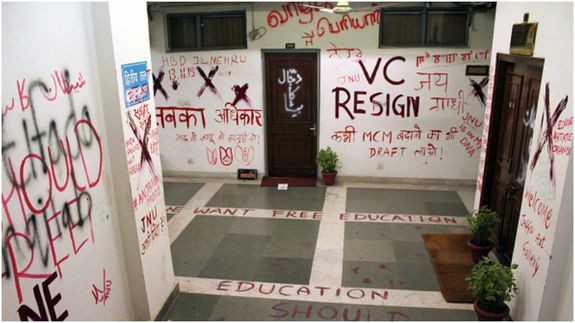 Celebration of diversity, including religious diversity, is considered essential to unity and integrity.  Not only the elite but the disadvantaged from diverse religious, social, regional, linguistic and gender backgrounds are torch-bearers of idea and India in JNU. The fee hike is an assault on the opportunity for this diversity to come together and strengthen itself and India in the process.

Some of the research scholars in JNU, as is being alleged by the frenzied media and bhakts, should have been settled in their lives. Yet, they are pursuing research because they could avail the opportunity to be in JNU at a much later stage. Many of them had to give up their pursuit of higher education after completing their graduation as their families could not afford to pay high fees in other educational institutes. These research scholars struggled hard to make it to JNU, but they could as long as the fee structure in the university had been ‘low’. Therefore, most of the research scholars protesting against the fee hike are not only doing it for themselves, but they are keenly aware of its repercussion for the next generation of students from economically poor sections of society.

Along with students and research scholars from poor economic backgrounds, even those whose parents might be able to afford to pay high fees are an integral part of these protests. Unlike a section of the rich and affluent in the country, these students not only care for their friends and colleagues but they have realised the importance of state funding to education. Day in and day out, they see that many of their colleagues would not be able to pay the hostel mess fee if there are no merit-cum-means scholarships. They know that the pretext of mess hikes would ultimately culminate in cuts into scholarships sooner rather than later. They do see that some of their colleagues never visit their families simply because they could not afford the travel tickets, and their presence at home would only be a burden on their families. They understand the determination amongst many from poor families who aspire to reach a position in life wherein they will be able to permanently change the economic status of their families. They also witness how the entrance into JNU by one person from an economically poor background encourages and ensures her/his siblings to pursue higher education. The majority of those from poor backgrounds are either from the socially deprived castes or from the rural agricultural communities. At a time when agriculture is under tremendous distress in the country, institutes like JNU provide platforms to the children of farmers to pursue their studies with a hope to change the fortunes of their families.

The students who can ‘afford’ high fees are also protesting because many of them, particularly girls, would not have been sent to JNU by their families if the fees were high when they took admission. In a country where most of the girls face systemic discrimination in every step of their lives, it would have been very difficult to be a research scholar or plan to be economically independent if institutions like JNU had not provided them with a chance to chase their dreams. Many middle class and affluent families do not like their daughters to be a student at JNU because these girls would not only be economically independent but would also think independently about their own lives. The girls could still make it to JNU in big numbers because there is no constraint of ‘high fees’ for which they have to depend on their parents entirely. Even those ‘affluent’ girls and boys who would not face any familial constraints are protesting against the fee hike. They are doing it not only in solidarity with the poor or female students but also to raise questions for the government. Why should they pay high fees when their parents are already paying taxes to the government? What are those taxes meant for? And are the direct taxes the only ones that matter? What about the indirect taxes and now GST that everyone including economically lower class and poor families keep on paying every day to the government?

It is not only the student community that is protesting against the fee hike but also the teachers of JNU! The teachers see their students every day. They interact with research scholars regularly. They know who would and who would not have made it to JNU without low fees. Moreover, there are many teachers who could pursue their studies, research, and get an appointment in as elite an institution as JNU only because in their time education was much cheaper. Rather, it was not a commodity but a social investment that would pay off economically too. Today, it is not only the students, teachers and staff of JNU who are protesting; most of the JNU alumni are also upset. Again, almost all of them are economically well off today and are taxpayers of India. But they are upset as they have a deep obligation towards JNU. Many of them, again, would not have been able to pursue higher education if fees were high in JNU. The voluntary obligation also comes from their realisation that without JNU their lives would have been incomplete. These JNU alumni are there in the bureaucracy today, in academia, in the media, in the development sector, in the entertainment industry, in the social movements and in foreign countries. They make their presence felt wherever they work mainly because they belonged to JNU. It made them study, to discuss, to debate, to think critically, to speak and to speak the truth and to speak truth to power.

JNU made the girls shout at the tops of their voices and boys to cry in the open. It promotes bonds amongst youth from different parts of the country. Many Indians converge in JNU fostering national integration in an exemplary way. But most of the nationally integrated JNUites and alumni believe in the idea of India having unity in diversity. It is against the conceptualisation of Ek Bharat – Shreshth Bharat. They stand for many Bharats in one India and no Bharat is greater than the other one. Celebration of diversity, including religious diversity, is considered essential to unity and integrity.  Not only the elite but the disadvantaged from diverse religious, social, regional, linguistic and gender backgrounds are torch-bearers of idea and India in JNU. The fee hike is an assault on the opportunity for this diversity to come together and strengthen itself and India in the process.

Read this article published in Asiaville on 11 Nov 2019