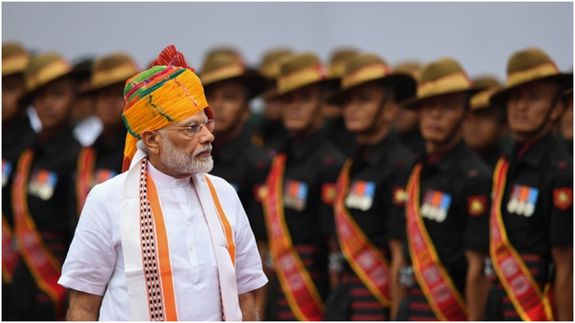 Photos and videos of Naga youth celebrating Nagaland’s self-declared independence day went viral on social media on the eve of India’s independence day. Most of the opponents of the BJP enthusiastically questioned the Modi government’s policy vis-à-vis Nagaland, which is a part of the sovereign Indian union since 1947. Many said that the Modi government had entered into an agreement with Naga organisations, allowing the Naga people a separate flag, constitution, and passport. All this while the Modi government is oppressing Kashmiri people to ensure one nation, one constitution, one flag – the pet project of the Rashtriya Swayamsewak Sangh. The critics have stated that the Modi government has adopted dual standards on the issue of integration of different units in the Indian Union. Has it embarked upon such a policy vis-à-vis Nagaland? We do not know as there has neither been denial nor endorsement of it, either from the Union government or Naga groups. The government and the ruling party have not come out strongly against such statements. BJP’s opponents are providing readymade ground for the Modi government to clamp down hard on dissidents in Nagaland in particular, and protest groups in the North East in general. When this action is taken, PM Modi’s social media followers will ask the opponents – didn’t you ask for it?

This is precisely what happened on the Kashmir issue. When BJP entered into an uneasy alliance with People’s Democratic Party, Modi’s opponents used every style and format to ridicule Modi and his party. The same people were criticizing the BJP for pulling out of the Jammu-Kashmir coalition government.  As if the contradiction in these two positions was not sufficient, PM Modi’s supporters were frequently asked on social media about the BJP government’s inability to scrap article 370. Now, PM Modi has amply demonstrated his ability, the opponents are crying foul. Whether the opponents are able to notice their frustratingly contradictory positionings, they paint themselves in a poor light in the eyes of the common people – the voters! The opponents have helped Modi in the best possible way on the issue of terror attacks in Jammu and Kashmir and killings of army personnel on the Line of Control. After the Pathankot and Uri attacks, the entire social media discourse by the opponents was aimed at proving the impotency of Narendra Modi against Pakistan. Opponents thought they had quickly adopted the BJP tactic of mounting a ‘nationalist’ attack on the government. The chorus was ‘Modi cannot act against terror’. While the rhetoric’s intention was right, and even factually correct, the delivery of the message was chauvinistic at its best and parochial at its worst. This is what PM Modi wanted from the opposition and they delivered beyond his expectations. In the first place, ridiculing PM Modi for inaction and in the second place, questioning the validity of the surgical strike were either naïve or opportunistic positions. Naivety and opportunism still have certain values, and if not values – certain weight or place – in competitive politics. Foolishness has none! The contradiction in the first instance could be due to innocence or opportunism; however, the contradiction of positions in the repeat scenario is nothing but foolishness. It is no wonder that PM Modi trumped all of his opponents out of a situation that emerged due to the Pulwama terror attack. The opposition, once again, asked PM Modi whether he could act against terror without specifying how he should act. Thus, trapped and ambushed! It is going to occur again on the issue of building a Ram temple at the disputed site in Ayodhya. The opponents have spared no opportunity in the recent past to make fun of the BJP leadership on its unkept promise of the construction of a Ram temple. What would the reaction of the same people be when BJP begins the construction? It is time for the opposition to realise that political discourse has already been changed from how unconstitutional it was to destroy the Babri Mosque to how the BJP has not kept its promise to build the temple. It is a paradigmatic change in discourse. Ironically, the opposition’s hastiness to ridicule BJP on such matters has contributed in legitimising one of the most hegemonic demands of BJP arising out of its majoritarian politics.

The social media critics of the BJP are part and parcel of what PM Modi termed as the Khan Market Gang, irrespective of their location in the world. PM Modi wants to keep the Khan Market Gang intact and active only to garner votes against them. Simply saying, they are not liked by —and are hated by—the common people. Unless and until these critics find out why they are not connected with the people, they would keep on helping PM Modi’s politics. Their desperation leads them to make a hero out of everyone speaking anything against the Modi government, without differentiating between the fundamental politics of such people. PM Modi’s team keeps on providing content to its social media critics knowing that their reactions would help consolidate support to the BJP and its government. PM Modi knows that setting up an agenda is most important in politics, which he loves to do. His critics, particularly those relying on social media, target their guns in such a way that helps him keep the attention of the country on his agenda. This parasitic anti-Modi gang has no clues of the mammoth nature of fascistic propaganda on the ground that runs far ahead of the eruption of a particular discourse on social media and lasts much longer than the visibility of posts on Facebook, Twitter, or Instagram. One of the biggest myths that Team Modi was able to perpetuate was about social media’s role in BJP’s 2014 victory. Since then, BJP opponents have left the political ground to enter the virtual world, while BJP and its parental organisation RSS kept a focus on strengthening the ground level organisation.

The question is what should the opposition, particularly PM Modi’s opponents in social media, do, and what should they not do? They should reflect upon what they want in terms of a solution to the Naga insurgency, and accordingly, make a statement on the pertinent issue. They should take a position on what should be the solution to the Ayodhya dispute, that includes leaving the matter to the judiciary, and popularise it on social media. They should know whether they want talks between India-Pakistan and accordingly welcome or criticise PM Modi’s policy towards Islamabad. The social media critics of PM Modi must stand for principled politics. Attempts to duplicate the BJP in terms of chauvinism, parochialism, opportunism and faking news would only strengthen PM Modi’s politics. Sooner the social media critics realise their follies, the better it would be for India. Otherwise, history will record the social media opponents of the Modi government as BJP’s B team that has played a critical role in perpetuating the Modi Raj in India.