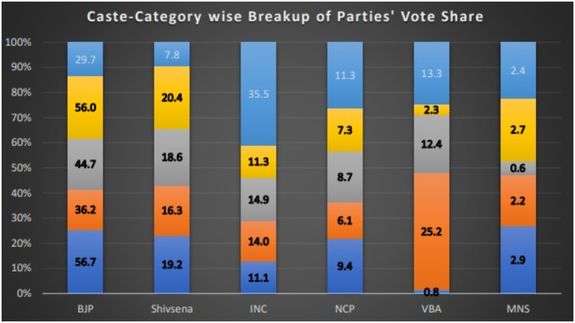 The recently conducted state-wide opinion poll by MIT School of Government (MITSOG), Pune has predicted a landslide victory for the BJP-Shiv Sena alliance in the state.

When the writing on the wall is clear, the opinion polls during the election season hardly matter. They could make the prospective winners complacent and further demoralise the opponents.  The general impression such a scenario creates is that of a depoliticised election, which is the case in Maharashtra at this point of time. However, it is an establishment of a different type of politics in society than what existed in the recent past. It was the inability of today’s opposition, which was the then ruling party, to read the writings on the wall that put them on the path of permanent decline. With a mass exodus from the ranks and files of Nationalist Congress Party and Congress in the state, the curiosity remains only in terms of whether the Bharatiya Janata Party would still go in for an electoral alliance with Shiv Sena.

The recently conducted state-wide opinion poll by MIT School of Government (MITSOG), Pune has predicted a landslide victory for the BJP-Shiv Sena alliance in the state. Nothing surprising! What could be of interest to political analysts is whether the total number of seats won by BJP and Shiv Sena would be more or less the same with or without an alliance! In both the scenarios, the BJP remains a dominant party and the Shiv Sena is placed at a distant second position in the state assembly. It makes no organisational sense for both the parties to forge a pre-election alliance. More so for the BJP, which is poised to get a majority in the assembly on its own. Based on David Butler’s Method of Uniform Swing to calculate votes to seat conversion, the MITSOG survey has predicted a whopping 176 seats to BJP if it contests all the 288 assembly seats. 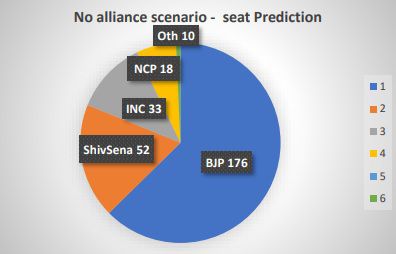 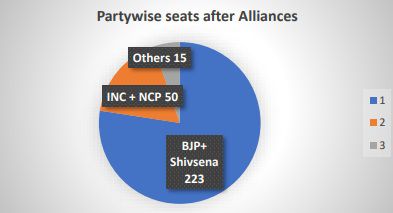 This prediction is supplemented by three major indicators, i.e. opinion about the performance of the state government, popularity of Chief Minister, and caste/community wise political preferences. There are only 23% of the respondent voters who are unhappy or extremely unhappy with the government. 39% of the voters are satisfied or somewhat satisfied, while 38% of the voters are fully impressed by the performance of the state government. There is no charismatic leader on the side of the opposition, who could sway away the ‘somewhat satisfied’ voters. It is clear from the respondents’ preference for the next Chief Minister of the state. 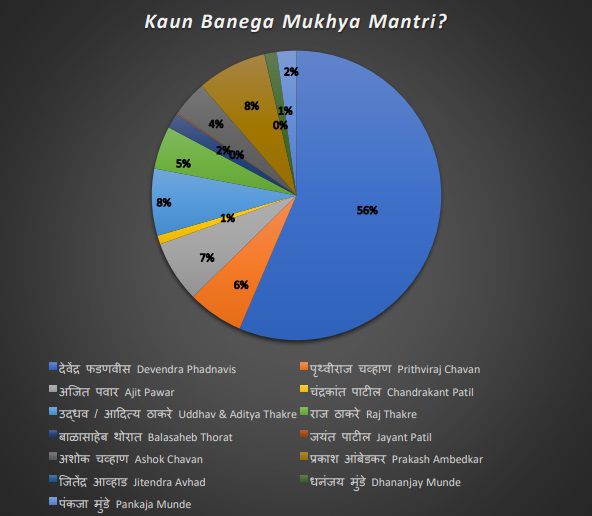 There are six important points of attention on the choice of Chief Minister. One, Devendra Fadnavis has established himself as a leader across the state, whereas in 2014 he was not much known outside the Vidarbha region. Two, there is tremendous clarity amongst BJP respondent voters about who is the boss in the state.  For example, even though a respondent’s favourite leader is Nitin Gadkari or Pankaja Munde, for the Chief Ministership their preference is for Fadnavis. The only dilemma for some of the BJP respondents is how to prefer Fadnavis over Narendra Modi, whether it is about their favourite leader in the state or who should be the next Chief Minister of Maharashtra. Three, there is a liking for Fadnavis even amongst Shiv Sena voters. Majority of the Shiv Sena voters think that an alliance would take place and have no qualms about another term for Fadnavis as a Chief Minister. Four, the crisis in the opposition is mostly about the credibility of leadership. People are determined to keep the Congress-NCP away from power until their leaders perform better in the opposition. Five, Raj Thackeray is not taken seriously by the voters and is seen as someone who is not capable of being a Chief Minister. Little preference for anyone from Thackeray clan as a Chief Minster could also be because of the legacy of Bal Thackeray, wherein he always placed himself above the chair of the Chief Minister. He was the remote control! In the future, the major challenge for Aditya Thackeray, who is posing himself as a dynamic youth leader, is to undo this perception. Six, 8% respondents’ preference for Prakash Ambedkar as the next Chief Minister is in line with about 7% of the votes polled by Vanchit Bahujan Aghadi (VBA) in the Lok Sabha election.

The BJP is popular amongst all the caste/community voters in the state. This finding corroborates the nation-wide post-poll survey conducted by CSDS after the Lok Sabha election 2019. The following chart from the fresh MITSOG survey in Maharashtra confirms the ‘terminal decline’ theory about the Congress party, if not of Congress system: 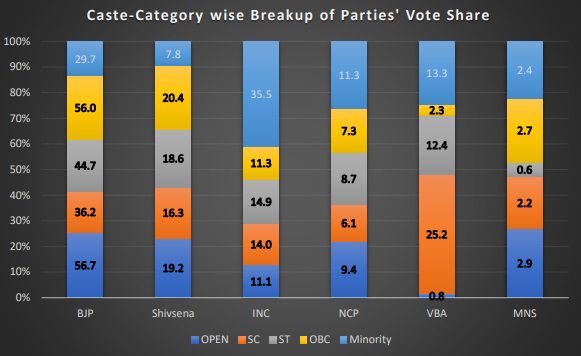 Even amongst the Scheduled Caste respondent voters, amongst whom Prakash Ambedkar has emerged as a formidable leader, almost 50% are inclined towards either BJP or Shiv Sena. Only a quarter of Scheduled Caste voters are VBA supporters indicating the skewed nature of support for Prakash Ambedkar’s organisation. Post Lok Sabha election inactivity on the part of Ambedkar and his organisation seems to have cost them a lot amongst their core voters. Interestingly, more than 35% of the total Muslim respondents said that they would vote for BJP or Shiv Sena in the state assembly election. It is indicative of two important phenomena. One, a considerable number of Muslims in the state have realised that a BJP-Shiv Sena alliance is going to rule the state for another five years. Hence, they would not like to invite anyone’s wrath by publicly taking a position against the ruling parties. In the end, many of them might not vote for BJP-Shiv Sena, but would not reveal it. Two, Muslims who have to deal with government agencies on a very regular basis, mostly the businessmen, shop owners, and entrepreneurs have already developed linkages with BJP and Shiv Sena’s local organisations to protect their interests. Amongst the open category respondent voters, as many as 75% were willing to vote for BJP or Shiv Sena when this opinion poll was conducted in the last week of August 2019. This is a very significant number as Marathas were included in the open category list in the MITSOG poll, that is neither SC, ST, OBCs, or Muslims. This is a tectonic shift in the state’s politics that is rocking the boats of Congress and NCP, but more of the latter party.

One of the most significant findings of this opinion poll is about the trustworthiness of EVMs. Only 48% of the respondent voters have full faith in the EVMs, while 37% are sure that EVMs could be tampered. The MITSOG poll has not established that all of these 37% respondents believe that the currently ruling parties have tampered with the EVMs. However, all of them are more than sure that as a machine it could be tampered. Not less than 15% respondents, again not a non-significant number, said that the possibility of tampering with the EVMs could not be ruled out. It means that a total of 52% of the respondent voters have no faith in the EVMs or have serious doubts about it. A matter of greater significance is as many as 20% of the total respondents who favour BJP-Shiv Sena believed in the tampering theory and 16% do not have confidence in the fool-proof nature of the EVMs. What does it mean? It means two things. One, amongst such voters there is much more disdain for the opposition parties than for any malpractices in the election. Two, such voters are much more enthused about the idea of India under Modi, for which they do not mind a niti or aniti of sam-daam-dand- bhed! In this case, both the propositions seem to be true.

Read this article published in Asiaville on 20th Sep 2019