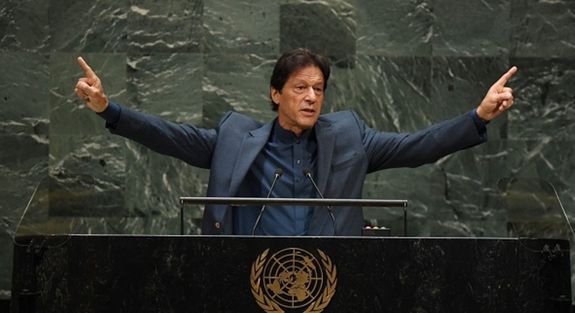 Whether you accept it or not, Pakistan’s further involvement in Kashmir would turn this land into as bloody a battlefield as Afghanistan. Your covert call to Kashmiri youth to pick up guns against oppression is neither Gandhian nor in the interest of Kashmir.

This is so fraudulent, Mr Prime Minister of Pakistan! In your UN General Assembly speech, whose Modi-style celebration is orchestrated in Pakistan, you called Mohandas Gandhi as the great Mahatma. In doing so, you have not demonstrated statesmanship but instead tried to cover up the history of the birth of Pakistan which was so maliciously designed and implemented by the Father of your own country, Mr Mohammad Ali Jinnah. If Gandhi was so great, why did not Mr Jinnah heed his consul in the turbulent period of the birth of the Indian sub-continent? Why did Mr Jinnah villainise Gandhi as the leader of the Hindus and designate himself as the only voice of Muslims? Perhaps, you know that Jinnah was wrong and Gandhi was courteous! Therefore, you chose not to mention how Pakistan was carved out of British India. Your long speech in the UN included many historical periods from the birth of Islam to the present-day conflict in Afghanistan, but you deliberately hid the truth behind the birth of Pakistan. Pakistan was born against the wishes and vision of ‘the great Mahatma’ as you referred to Gandhi in your UN speech. His vision still sustains but Jinnah failed in his mission. Obviously, you find no inspiration, cause, or spirit to mention Barrister Jinnah in front of the world assembly but had to mention Gandhi.

India upheld and cherished the vision of Gandhi for 70 long years after independence resulting in not only equal rights but also protection of special rights of minorities across the country. It resulted in minorities – Muslims, Sikhs, Christians – enabling themselves to reach the highest offices of the country. India has had a Prime Minister, Presidents, Army chiefs, Chief Election Commissioners, Chief Justices, governors of different states, diplomats, captains of cricket and hockey teams, and celebrated film and cultural artists from the minority communities. It would have been statesmanlike on your part to mention that in your UN speech when you tried to portray a certain picture of India before the international media. Mr Prime Minister of Pakistan, you had rightly eulogised Islam and the equal rights of minorities assured in Islam. But your words sound hollow without examples from your own country, never mind the rest of the Islamic world. It is not the failure of Islam but the gross failure of leaders like Jinnah, whose portrait hangs in your office.

Mr Khan, you were candid in expressing your opinion against the then Pakistani government joining hands with the Americans in the post 9/11 scenario. It was even more candid, Mr Khan, to provide an account of how Mujahiddins were trained in Pakistan by Pakistani agencies with financial support from the United States in the 1980s. It would have been better to express gratitude towards Saudi Arabia for pouring petrodollars into Pakistani madrasas and Mujahiddin training camps. However, it is sheer hypocrisy to justify Pakistan’s collaboration with the United States in Afghanistan against the Soviet Union. This overt collaboration amongst the states of Pakistan, the United States, and Saudi Arabia produced a phenomenon which you pretend to be opposing now. It produced the Taliban and the Al-Qaida. What did the Taliban do in Afghanistan? Amongst many of its laurels, the brutal destruction of the Bamiyan Buddha stands out as the most inglorious one. To remind you; Mr Khan, Pakistan and Saudi Arabia were the only two countries that recognized the Taliban government in Afghanistan. You and the powerful military establishment in your country are still conspiring for the return of almost the same Taliban regime in Afghanistan. And you preached about tolerance and equal rights of minorities?

Mr Prime Minister of Pakistan, you should know that half-truths are more dangerous than complete lies. You talked against the racial and chauvinistic world view of Rashtriya Swayanmsewak Sangh. Why not talk about the similar ideology of the Muslim League in pre-independent India and that of Jamat-e-Islami in pre and post-independent India? The Hindu Mahasabha, whose leader’s name you could not pronounce properly in your speech, was an ideological brother of RSS. The Muslim League was the mirror image of the Hindu Mahasabha, as they both firmly believed in religion-based ‘Two-Nations’ theory. Do you have the courage to denounce Jinnah’s Two-Nations Theory? The Congress party, whose home minister’s statement you fondly mentioned, fought against both the organisations in pre-independent India. You quoted the Home Minister from the Congress on exposing the terror plans of the people and organisations associated with the RSS. But you conveniently forgot that the same Home Minister and his government accused Pakistani agencies of planning the Mumbai terror attack of 2008. The same Home Minister’s government convinced the UN Security Council to declare Hafeez Saeed as a terrorist, whom your government is protecting till date. Terrorism is no answer to human rights violations, Mr Prime Minister of Pakistan! Violations of human rights in Kashmir are a matter of concern but so also are the violations in Pakistan, China, Saudi Arabia, and anywhere in the world. All the world leaders, including you Mr Khan, have been selective and hence opportunistic in condemning human rights violations. A history of human rights violations is incomplete without knowing what happened in East Pakistan and what has been happening to minority communities across Pakistan since 1947. Mr Khan, you would have won the hearts of millions of Indians who harbour no ill-will against the people of Pakistan if you had tried to replicate Fahmida Riaz. The legendary feminist poetess of Pakistan told the Indians not to become like their next-door neighbour. All the traits of regressive mentality, superiority complex, and love for the ancient past that you counted as hallmarks of fascist organisations had ruined Pakistan, said Fahmida Riaz to Indians. You had no such courage but only an eye on your political gains.

It is the duplicity, hypocrisy, and moral hollowness of Pakistan, as personified in your speech, which would result in further isolation of Kashmiris from the world opinion. It is no secret that Pakistani leaders, including you, have always utilised the Kashmir issue to consolidate their political positions in Pakistani power establishments. In this respect, you are no different than Indian Prime Minister Narendra Modi whom you accused of mustering power through ultra-nationalist sentiments. You are trying to be his Pakistani mirror-image and you are becoming successful by launching diplomatic attacks against India on the Kashmir issue. But you need to introspect on what caused the Kashmir tragedy. Is it only the Indian government’s approach to the Kashmir problem? Or is it the successive Pakistani governments’ promotion of radical Islamist outfits in the valley which is also responsible for the blood baths in this paradise on earth? Pakistan’s direct involvement in training, harbouring and shielding the terrorists who create mayhem in the Kashmir valley is a case similar to your involvement in Afghanistan.  Pakistan has actively promoted the erosion of Kashmiriyat in the valley to be replaced by Islamiyat. While you openly talked about training of Mujahiddins in Afghanistan by Pakistani agencies, why are you not justifying or even acknowledging the same role these agencies have been playing in Kashmir? Whether you accept it or not, Pakistan’s further involvement in Kashmir would turn this land into as bloody a battlefield as Afghanistan. Your covert call to Kashmiri youth to pick up guns against oppression is neither Gandhian nor in the interest of Kashmir. The land and people of Kashmir can be peaceful, stable and prosperous only with Gandhi’s vision of dignity, truth and non-violence. Kashmiriyat could be safeguarded and strengthened only under the inclusive and secular Indian constitution and only with as vibrant a democratic set up as in India. Dear Imran Khan, be assured that sooner or later the secular, democratic, inclusive India of the great Mahatma Gandhi would rise to the occasion, whether you like it or not!

Read this article published in Asiaville on 4th Oct 2019