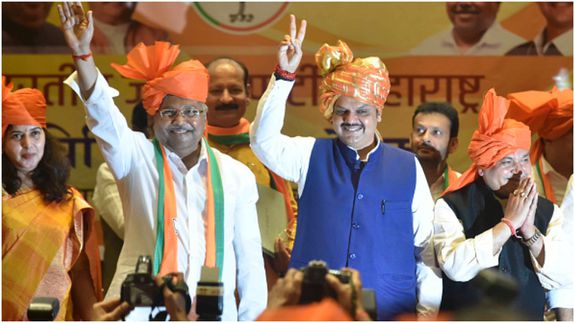 A better option for the Shiv Sena is to extend outside support to the BJP to form the government. However, its power-hungry MLAs would never allow its leadership to think of long-term politics.

Two weeks after the announcement of the assembly results, Maharashtra is on the verge of President’s Rule. This is despite the fact that a pre-poll alliance between the BJP and the Shiv Sena has secured a comfortable majority in the assembly. If politics is about the art of possibilities, the major parties in the state are deeply engrossed in creating the best of the possibilities for themselves. However, politics is more about the core social constituencies of each political party, and all the possibilities need to be identified without hurting the core politics of the parties. The key political players in Maharashtra are attracted to new possibilities, while simultaneously pulled back by the consideration of their core constituencies. While Shiv Sena and NCP do not have a social base outside the state, the BJP and the Congress have to take into account their national politics before making any decision on government formation in Maharashtra. The BJP’s internal competitive politics is also proving to be an obstacle for its leadership known for quick-fix solutions in terms of government formation.

Devendra Fadnavis, BJP’s poster-boy two weeks ago, is suddenly looking like a lone man. His Man Friday, Chandrakant Patil, is now one of the covert competitors for the top post. The Shiv Sena might give up its insistence on half-half tenure of chief ministership if the BJP nominates someone else as the Chief Minister. Hence, it isn’t just the BJP but also the Rashtriya Swayamsewak Sangh who are maintaining a safe distance from Fadnavis. Otherwise, Fadnavis had always been the number one choice for the bosses in Nagpur. The gossips have even concluded that the Modi-Shah duo wanted to cut Fadnavis down to size for two reasons. One, his proximity to the RSS top brass and two, his attempts at creating his own larger than Modi size in the state. If the BJP would have won seats nearing the majority in the state, Fadnavis could have emerged as an internal challenger to Amit Shah in 2024 and beyond. Since Modi-Shah’s dominance in BJP, no state leader has actually won a majority in a state assembly on his/her projection as the Chief Minister. The two exceptions were their home state – Gujarat and a crucial state in the northeast – Assam. All the new Chief Ministers of the BJP since 2014 had been post-result choices – be it Fadnavis himself or Yogi Adityanath. The BJP lost their assembly elections under all of their incumbent Chief Ministers in Rajasthan, Madhya Pradesh, and Chhattisgarh. In Karnataka, the BJP could muster the majority only through Machiavellian means and not in the election. This trend should ring massive alarm bells for Yogi Adityanath, who could again be seen as a competitor to Amit Shah at the national level.

In Maharashtra, the options for the BJP are limited. Either they should agree to two and a half years’ Chief Ministership for both the parties, or they should part with most of the coveted cabinet berths or replace Fadnavis. The final option looks easy but it is difficult to find a successor to Fadnavis. He has already eliminated viable options such as Eknath Khadse and Vinod Tawade, while Pankaja Munde lost the election. Chandrakant Patil is equally unacceptable to the Shiv Sena. Most importantly, the RSS would not like a replacement of a Brahmin Chief Minister with a non-Brahmin leader in Maharashtra. It could create huge resentment in its core base. This brings the focus on Nitin Gadkari, who is equally close to RSS, acceptable to the party’s core voters, and could pacify Shiv Sena in a better way. It is important to note that Gadkari was the RSS choice as BJP’s national president when the party had a rough patch post the 2009 Lok Sabha election. However, since his tenure as a national President, Mr. Gadkari has developed national ambitions. He has silently projected himself as a leader who could take everyone along and could be very useful to run a coalition government. Before Amit Shah’s elevation as Home Minister, many looked at Mr Gadkari as Modi’s able successor. Naturally, Amit Shah would be a happy man if Gadkari returns to state politics. The question is whether Gadkari is willing to become the Chief Minister of India’s second largest state. In his budding years in politics, he had witnessed how Narasimha Rao convinced Sharad Pawar to return to Maharashtra as a Chief Minister and the rest is history. It keeps the relevance of Fadnavis intact in the leadership tussle, while the central leadership would not mind the current Finance Minister of Maharashtra, Sudhir Mungantiwar to don the Chief Minister’s hat. Thus, the game is open within the BJP but there are not so many options for other political parties.

The Shiv Sena has no option but to make peace with the BJP even though its space of bargain increased significantly. Shiv Sena’s social base is considerably of a Hindutva mind set and it grew up by consistently criticizing the Congress for Muslim appeasement. In a scenario wherein Shiv Sena is in the government and the BJP is without a presence in the government, the RSS would keep on provoking local communal issues. While the Shiv Sena will struggle to take positions and actions on such issues to keep its government safe, its social base will swiftly switch to the BJP. A better option for the Shiv Sena is to extend outside support to the BJP to form the government. However, its power-hungry MLAs would never allow its leadership to think of long-term politics. In fact, the leaders of all the other parties want the BJP to be in the government as they are afraid of the BJP in the opposition. The BJP, with 105 MLAs, is weak in the government while it is quite a strong opposition with the same number of seats. Most importantly, the BJP has an uncanny ability of immediately blaming the next government for the mess that it created in the last five years in the state. Sonia Gandhi and Sharad Pawar are aware of this potent danger. Yet, they also have to keep on showing the carrot of power to their own MLAs. It is aptly said that the Congress and the NCP neither know nor want to learn how to be an effective opposition. The Congress and the NCP are fearful of a strong BJP in the opposition. But they do not want to become an effective and meaningful opposition even when people have given a mandate for the same. Under such conditions, some electoral setbacks to fascistic parties and its agenda are meaningless.

Read this article published in Asiaville on 8th Nov 2019