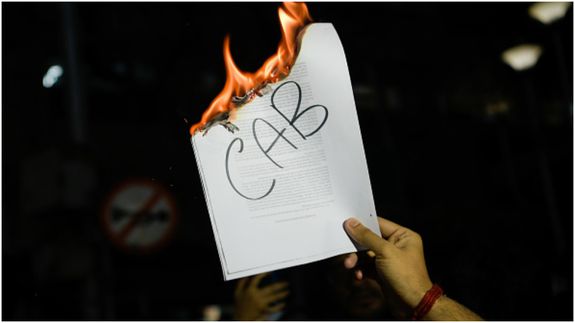 The NRC will turn into an exercise to put in limbo the citizenship of not only as many Muslims as possible but also the political opponents of RSS. This is the final solution that RSS is looking for to establish its firm control over the state, society and each individual.

‘Mohammad Ali Jinnah must be smiling in his grave’ is a statement that is being made by many critics of the Citizenship (Amendment) Act, 2019. Yes, Mr Jinnah would have been a contented man today! However, not so much for India’s amendments in its Citizenship Act as much for the way the Parliament of India is being repeatedly used by the ruling majority. This was Jinnah’s precise argument against the then Congress leaders such as Jawaharlal Nehru, Vallabhbhai Patel, and Abdul Kalam Azad. While Nehru-Patel-Azad were assuring the secessionist Muslim League of the equal status of all despite the religious belief of each individual and equality of opportunity for all in united India, Jinnah was convinced that a majority of Hindus would alienate the Muslims. The makers of India’s Constitution and leaders of independent India’s government proved Jinnah wrong for 70 long years. Despite the deep wounds of partition, minorities were not discriminated against in the Constitution or the law-making since independence. Rather, the wounds of partition reaffirmed the conviction of Indian leaders about secular principles. The Indian state, through its constitution and law, has been based not only on the principles of equality and justice but also on the necessity of brotherhood. In the Constituent Assembly debates, Dr Babasaheb Ambedkar thoughtfully emphasized on the need for brotherhood without which the principles of equality and justice would be rendered meaningless. Today, India’s Parliament as well as other supreme institutions seem to have lost the sense of brotherhood, which would have delighted Jinnah.

Mohammad Ali Jinnah often made a mockery of the commitments offered by the national leadership of the Congress. His major point was about the brute majority that Hindu conscience would constitute in India’s legislative bodies, which in turn would ‘democratically’ enact the laws to deny equal rights to Muslims. The passage of the Citizenship (Amendment) Bill summarizes Jinnah’s outlook in no covert ways. But it hasn’t happened in a day or two. Since 2013, when Narendra Modi was declared as BJP’s Prime Ministerial candidate and Amit Shah as in-charge of Uttar Pradesh, the BJP and its father organization, the RSS, have been working zealously to reduce Muslims to ‘minority voters’ against whom the ‘majority Hindu’ would have political consolidation. It has resulted in the BJP firmly not accommodating Muslim candidates in the Lok Sabha and state assembly elections while instilling fear in the minds of the ‘majority Hindu’ of the dangers of electing Muslim representatives of any other parties. Jinnah propagated the demand for Pakistan based on the hypothesis that even under a democratic setup, a minority would have no rights if the majority is determined to deny such rights to them. The BJP’s electoral politics and its governance agenda are only validating Jinnah’s hypothesis. So, who is speaking in the language of Pakistan, Mr Prime Minister?

The Citizenship (Amendment) Act is antithetical to the values of the Indian Constitution due to its overt exclusion of Muslims, but more so because it has come into effect as a result of the BJP’s blatant majoritarian politics. The amended Citizenship Act is linked to Ayodhya, Kashmir, Mob-Lynching, Pragya Thakur and the BHU. On the dispute in Ayodhya, organizations representing Muslims in the disputed site and many political parties along with several civil society groups had been asking the RSS to wait for a judgment of the court. However, the RSS discarded the judicial solution claiming that the court couldn’t deliver in matters of faith. It even went ahead and brought down the mosque at the disputed site, thus destroying the very evidence in support of its own claims. Today, the court has delivered a judgment respecting the faith of the majority, which is more or less being accepted by the Muslims of the country. An important question is whether the RSS would have accepted the court’s wisdom if the judges had opined otherwise? Given its stance on Sabarimala, it is obvious that the RSS would accept only those decisions of the judiciary that suit its politics.

Just like Ayodhya, for RSS, the Kashmir problem has always been an issue of Hindu vs Muslim politics. How can there be Muslims in a majority in any of the states in India? Better to demolish the statehood of such a region or redraw its boundaries! The celebration that followed the bifurcation of Jammu and Kashmir and the abrogation of its special status was more about de facto disenfranchisement of Kashmiri Muslims in the valley. The utter insensitivity demonstrated by the incumbent regime towards the plight of the Kashmiris goes well with its fascination for the state of Israel. Again, for RSS, Israel is a role model for the treatment the Jewish state metes out to the Palestine Muslims. No wonder the amendments to the Citizenship Act are also influenced by Israel.
The Constitution has been amended to exclude Muslims from three neighbouring countries to be almost ineligible to apply for Indian citizenship when Muslims within India are treated as lesser than the animals. Each case of cow-vigilantism openly violates the right to life and the right to life with dignity to its victims. Yet, the central government and BJP’s state governments not only turn a blind eye to such inhuman acts but BJP leaders also don’t mind defending and even felicitating the criminals involved in lynching acts. The Supreme Court of the country, which is so mindful of its own dignity, finds it normal that several state governments don’t heed to its directions on preventing mob-lynching. A summons by the Supreme Court to the Home Secretary of any of the states would make the whole bureaucracy fall in line with the top judiciary’s directives. But who cares for the lives of poor Muslims and Dalits who are victims of cow-vigilantism?

Amit Shah’s BJP has made its intentions clear of outrightly converting India into a Hindu-Rashtra of RSS notions when Pragya Thakur was given a party ticket to contest the Lok Sabha elections. Even when she questioned and ridiculed the martyrdom of Hemant Karkare, the BJP continued with her candidature. Her remarks on Gandhi and Godse in the Lok Sabha and outside the Parliament are being regretted by the BJP but not enough to expel her from the party. The BJP’s love for Pragya Thakur is synonymous with its promotion of cow-vigilante groups. At the base of both is a hatred for Muslims. This hatred has gone to such an extent that a Muslim scholar appointed to teach Sanskrit in Banaras Hindu University was made to resign and his resignation is celebrated by a section of the students. Neither the BJP majority government at the centre nor in Uttar Pradesh made efforts to ensure that a Muslim proficient in Sanskrit would be able to teach this language and its literature to the students. In such an environment, there is no ground to believe that the countrywide NRC exercise is only to weed out the Muslim infiltrators, whose size is again an exaggerated myth by the RSS propaganda machinery. The NRC will turn into an exercise to put in limbo the citizenship of not only as many Muslims as possible but also the political opponents of RSS. This is the final solution that RSS is looking for to establish its firm control over the state, society and each individual. Therefore, a countrywide NRC must be resisted tooth and nail!

Read this article published in Asiaville on 13th Dec 2019